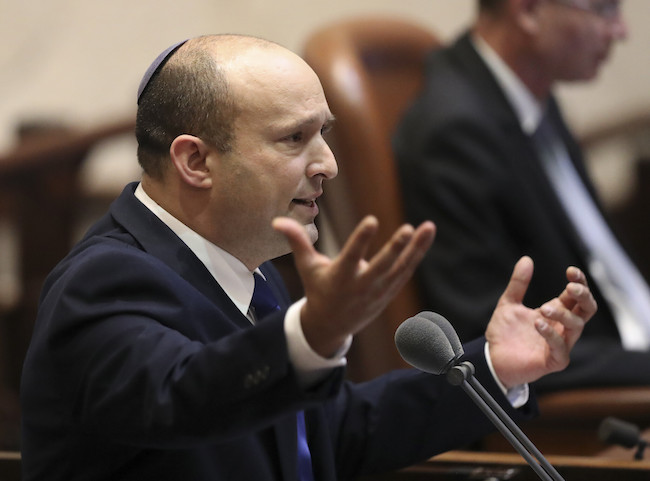 In a history-making vote, Israel’s 36th government was sworn in at the Knesset on Sunday. Yamina chair Naftali Bennett was installed as prime minister and Benjamin Netanyahu was ousted after 12 years of consecutive rule as premier.

MKs voted by a wafer-thin 60-59 in favor of the new government, made up of right-wing, left-wing, centrist, and Islamist parties that came together to oust Netanyahu and end two years of political deadlock.

One MK, Ra’am’s Saeed al-Harumi, abstained from the vote, in a protest centered on the demolition of Bedouin homes in the Negev. Three MKs from the predominantly Arab Joint List — Ayman Odeh, Ahmad Tibi and Osama Saadi — stayed out of the chamber until the votes were initially counted, ready to abstain if necessary to ensure the coalition was elected but, entered to vote against once it was clear that the required simple majority was assured.

Here is the new Cabinet Ministers list of who’s who:

Opposition leader MK Benjamin Netanyahu addressed the ‘right-wing bloc’ Monday and announced that the bloc’s mission would be to bring down the government which was inaugurated last night. “We have a very strong opposition – 53 MKs, who are cohesive and strong to overthrow this dangerous left-wing government, this fraudulent government. It will fall quickly and I will tell you why: the only thing that connects them is hatred, exclusion and power. It is impossible to have such a government.” Netanyahu stated.

AFSI congratulates Israel’s new government and wishes it hatzlacha. We would be remiss if we did not state our concerns and expectations. At the very top of our priority list we hope that they will 1) Not establish a two-state solution; 2) Continue to fight to keep Iran from re-entering the nuclear deal; 3) Not cave in to Arab demands for land grabs 4) Not freeze the building and development of new homes in Judea and Samaria; 5) WILL DECLARE SOVEREIGNTY OVER JUDEA AND SAMARIA.

Of course we must acknowledge the huge debt of gratitude we owe to Israel’s longest-serving Prime Minister, Benjamin Netanyahu, for his many years of service and for his many successes bringing Israel to where it is on the world stage today. We also give our heartfelt thanks to all the ministers and MKs who served tirelessly with him over the years; fighting to defend Israel’s legal rights and her Sovereignty. May you all go from strength to strength.

Sources:
Bennett sworn in as prime minister, unseating Netanyahu after 12 years in power, by Raoul Wootliff/Times of Israel, June 13, 2021

Netanyahu: We will bring down this left-wing government as soon as possible, by Arutz Sheva Staff, June 14, 2021