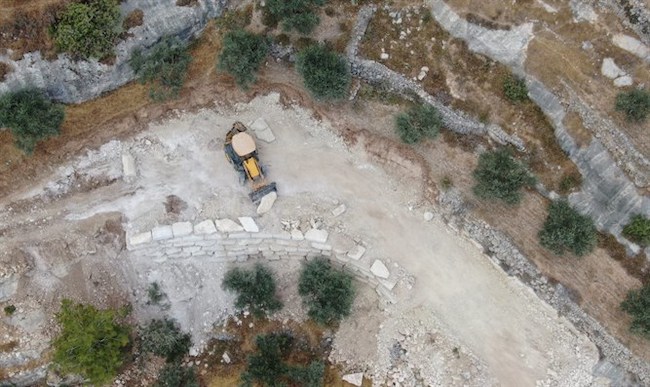 The Regavim movement sent a letter to Defense Minister Benny Gantz and the Civil Administration (that has authority over Judea and Samaria). Regavim is demanding that they take immediate action to enforce Israeli law and prevent the paving of a strategic road that would link two key villages under Palestinian Authority control.

The two villages in question are Battir, south-west of Jerusalem, and Husan, further south-west and just moments away from the haredi city of Beitar, both located in the Gush Etzion bloc in the Judean Hills. The Palestinian Authority is planning to pave a road that runs from Har Gilo, just outside the capital, and links areas of illegal expansion north of Battir all the way south to Husan.

Eytan Mellet, Regavim’s coordinator of activities in Judea and Samaria, filmed the areas concerned on Thursday morning, and explained the special significance of the road that would link Battir and Husan. He stressed that the road creates a strategic corridor through land that is ostensibly under full Israeli control, land that links Jerusalem to the Gush Etzion bloc, and that the paving of the road would create a de facto situation in which the Palestinian Authority takes control over this area instead.

The head of the Gush Etzion Regional Council, Shlomo Ne’eman, added that this specific case perfectly illustrates the ongoing attempts of the Palestinian Authority to create facts on the ground and continuity of Arab settlement across swathes of State-held land. “The paving of this road constitutes yet another attempt to harm Israeli sovereignty,” he said. “We have to stop this yesterday already and prevent them from establishing a state under our very noses. The issue of protecting State-held lands and enforcing laws against illegal construction, takeovers, and infiltrations is something that should be at the top of the government’s agenda.”