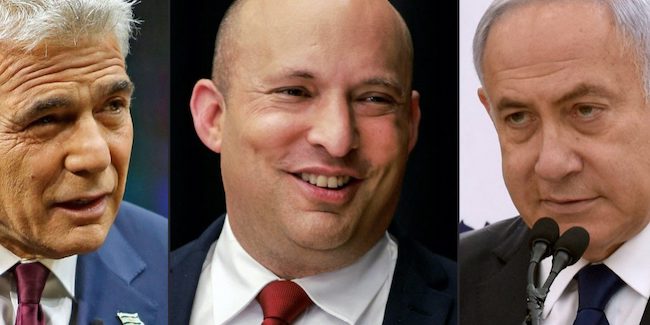 The leaders of the “change bloc’s” Yamina, New Hope and Yesh Atid parties met Tuesday night to sort out remaining differences. This Sunday the new government is set to be approved and sworn in.

Naftali Bennett, Gideon Sa’ar and Yair Lapid agreed that New Hope’s Ze’ev Elkin will be appointed minister in charge of liaison between the Knesset and government. The news came after reports that Elkin had set new conditions for supporting the government — specifically the formation of a new body to oversee enforcement of alleged illegal construction by Palestinians in the West Bank’s Area C.

In a joint statement, the parties called the reports “ridiculous spin.”

The eight-party “change government” alliance, headed by Bennett and Lapid, anticipates winning a 61-59 majority in the confidence vote Sunday, after wavering Yamina MK Nir Orbach said earlier Tuesday that he would back the new coalition.

On Tuesday Prime Minister Benjamin Netanyahu’s Likud party approved a motion to reserve three open spots on the party’s electoral slate. This was a last-ditch bid to entice members of right-wing parties in the change bloc to oppose the proposed government in exchange for a guaranteed spot on the Likud roster in the next election.

We pray things turn around.

Source:
Change bloc chiefs meet to iron out wrinkles as Likud steps up hunt for rebels, by Raoul Wootliff/Times of Israel, June 9, 2021