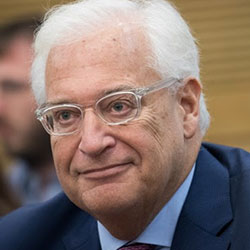 Today’s must read is an Arutz Sheva OpEd by Nadia Matar and Yehudit Katsover (Women in Green). Matar and Katsover appear before groups throughout Israel as part of their efforts to promote the vision of Israeli sovereignty over Judea and Samaria.

They state that the status quo “…presents a dangerous and stupefying illusion that is allowing a Palestinian state to become a reality right under our noses, with all of the dangers that it presents to the long-term future of the State of Israel. We therefore repeat again that Israeli sovereignty over Judea and Samaria is an urgent necessity.”

Judea and Samaria are INCORRECTLYcalled the ‘West Bank,’ a term given to the land by the government of Jordan after Jordan illegally occupied the land in 1948.

Senior officials say US Ambassador to Israel David Friedman is seeking to be able to say ‘Judea and Samaria’ in official statements instead of ‘West Bank.’

Read about this development HERE and for the Palestinian response follow HERE
.