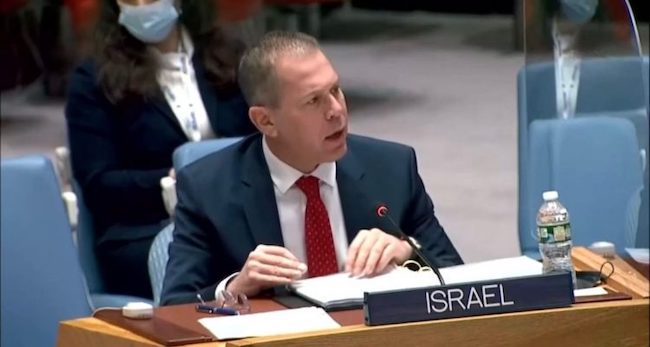 In a special debate devoted to the Middle East conflict, the Palestinian representative accused Israel of apartheid several times and even wore a mask with the words “Stop Apartheid.”

Erdan responded sharply, saying, “Can anyone honestly look me in the eye and tell me that Israel, a country that protects the social and political equality of all of its citizens, is guilty of systematic injustice? A country in which Arab doctors, Arab members of parliament and Arab ministers serve alongside their Jewish counterparts?”

With the Ukranian crisis at the forefront of the news today, the world is an absolute mess. When will the United Nations do a serious turnaround and tackle the real threats in the world? How about condemning the many nations who sit on the UN “Human Rights” Council and are the worst offenders of human rights? The UN needs to get off their obsessive condemn Israel bandwagon and deal with legitimate issues threatening world peace. Israel is not an apartheid state. Never was, never will be.