“Israel is vital to the interests of America and western civilization,” was the message delivered by AFSI’s Chairman, Mark Langfan, at the July 24 evening rooftop meeting of Americans for a Safe Israel. With forty activist members of AFSI in attendance, both Mark Langfan, and his father, William Langfan, gave stirring talks on subjects they have studied in depth.

William Langfan has devoted years of investigation into the subject of the PLO Charter, which was supposedly amended, and as William meticulously documents, has NEVER been done. The Charter, or the “Junior Koran”, absolutely fails to recognize Israel’s right to exist and calls for armed resistance until “Palestine” is liberated. William gave each attendee a packet of articles detailing “Portions of the Original Palestinian National Charter of 1964,” portions from the Charter of 1968, and the exchange of letters between Yasser Arafat and PM Yitzhak Rabin. The letters are particularly informative because the last line of Arafat’s letter states that “the PLO undertakes to submit to the Palestinian National Council for formal approval the necessary changes in regard to the Palestinian Covenant.” Based on this letter, Rabin agreed to recognize the PLO as the representative of the PA and begin negotiations on the “peace process.” Unfortunately, Arafat’s promise was NEVER kept, and the changes were NEVER made. Israel, however, proceeded as though it had a trustworthy partner. The results speak for themselves. The William Langfan packet continues with the Israeli-Palestinian Interim Agreement of Sept. 28, 1995; the voting session of the Palestinian National Council on the PA Charter, Gaza, April 24, 1996; the PA “Amendment”, April 24, 1996; the Wye River Memorandum of Oct. 23, 1998; President Clinton’s remarks to the PNC in Gaza City on Dec. 14, 1998; the chart of fatalities from PA terrorism from 1920-2012; Approval of articles in the 1998 PA Charter; and concludes with portions of the PNC political program of June 9, 1974. The final item on that list reads “The PLO will strive to strengthen its solidarity with the socialist countries, and with forces of liberation and progress throughout the world, with the aim of frustrating all the schemes of Zionism, reaction, and imperialism.” So much for hopes for “peace” with the PA.

It was Mark Langfan’s presentation that preceded his father’s and that dominated the evening’s discussions. With incredible attention to detail and fact-finding, Mark has printed maps and charts and graphics that tell Israel’s story in a visually incontrovertible way. He begins with historical background into the Middle East under Alexander the Great’s defeat of the Persians in 331 BCE, and Churchill’s need for Israel in his defeat of Hitler’s Arabs in May, 1941, so that we can understand Israel’s strategic value in the dramatic imbalance between the 370 million Muslims in the ME against the 11 million Greeks. We also see the Black Gold Triangle running through the ME which holds 56% of the world’s known oil and gas resources. Then Mark shows us maps illustrating that Israel IS NATO’s south-eastern flank, defending Cyprus, Rhodes, Crete, and even Greece, against Turkey and an Iranian-occupied Israel, should a PA state be created in Judea and Samaria.  Without Israel as the “finger in the dike”, Iran and/or Turkey would be on Europe’s doorstep. How safe would America be in that circumstance? Langfan illustrates Israel’s strategic value to the U.S. If Israel is not there as the bulwark against ME terror, the dominoes will start to fall.

Langfan’s most familiar map is that of the so-called “demilitarized” PA state, which shows Judea and Samaria occupied by enemy tanks and trucks firing rockets and missiles at the 9miles stretch of Israeli cities along the Mediterranean which holds 70% of the Jewish population and 80% of its industrial base. Langfan informs us that “the firing of 1 rocket from the “west bank” into Tel Aviv is like the firing of 1 rocket from Queens into Manhattan.” How long would New Yorkers tolerate that? How long could Israel survive a multi-rocket attack? And Langfan points out that katyusha rockets carry ball-bearings and chemical weapons that do indescribable damage. One last graphic that Langfan distributes is that of the water aquifers that exist under the mountains of Judea and Samaria. It is this water that supplies the heavily populated cities in the low-lying areas. Those who follow the subject of the water know about the Arab pollution of the water because of their refusal to build sewage treatment plants. This has caused major health problems within the Israeli, as well as the Arab population.

Everyone in attendance was equipped with packets of Mark Langfan’s materials, and was urged to be an ambassador to educate people about this vital information. Mark has made countless trips to Washington, DC, to the Knesset in Israel, to churches, synagogues, and groups throughout the country, in order to educate people about the issues. He is willing to continue to do so. William Langfan, also, has met with dignitaries in DC and Israel, as well as leaders everywhere, in order to spread his message. This team of father and son is a powerful one. They are untiring in their efforts. One example of someone they have influenced is AFSI Advisory Council Member Kenneth Abramowitz. Ken saw that Mark and William were working as individuals to educate people, and he decided to follow in their footsteps. He has prepared an impressive document, “The Future of Western Civilization: How to Save Western Civilization From Itself.” He is ready to go on speaking tours to present his position. He sets a shining example to all concerned parties.

Now that Mark Langfan has assumed the role of Chairman of AFSI, we know that AFSI members will dedicate themselves to delivering his message and materials, and those of his father, to everyone and anyone who will listen. We urge all interested parties who wish to be part of the educational team to contact AFSI: 212-828-2424; afsi@rcn.com; mapmun@aol.com. 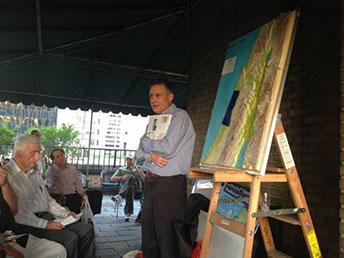 Mark Langfan at the easel with William Langfan in front row 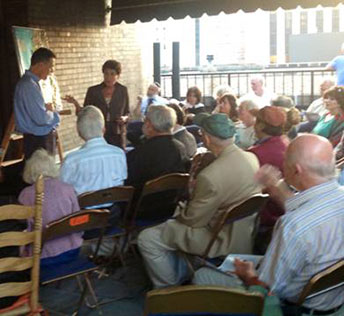 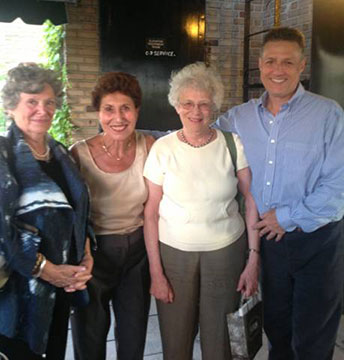