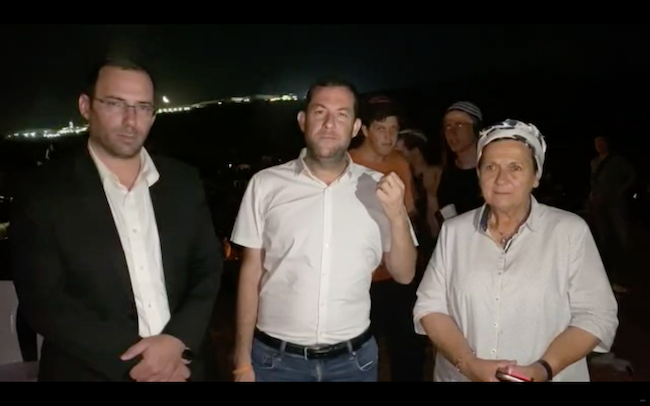 Early this morning, Yossi Dagan, head of the Samaria Regional Council, arrived at one of the “new settlement” sites established by the Nachala movement. Dagan’s visit was prompted after he learned that Border Police had arrived in force and were violently evacuating the Jews there, just as they had already done in five other locations. Dagan was accompanied by the head of the Nachala movement, Daniella Weiss, and by MK Simcha Rotman of the Religious Zionism party.

“We have seen terrible scenes of violence here,” he charged. “For example, two youths have been seriously injured, one whose jaw seems to be broken, and the other has a head wound,” said Dagan.

“The Lapid government is betraying its task of building the Land of Israel and damaging Zionism, and the unprecedented levels of violence it is using are unacceptable in a democratic state.” Interior Minister Ayelet Shaked also protested the brutality against the “wonderful” Zionist youth, tweeting, “Again there is violence [against] settlers. It would be better for the police to save its energy to eradicate real crime in the country.”

A massive amount of Israeli security forces are mobilized each and every time to prevent Jews from building up their land. Yet, when it comes to illegal construction by the Palestinian Arabs in Area C, the PA is given free rein to illegally seize and control the land. Jews should not have to sit back and watch this happen! The Nachala Movement put together a carefully thought out and peaceful plan to reclaim the land. The purpose of Nachala’s operation was to try and create facts on the ground in the hope that some of the new communities would eventually be allowed to remain. If there is to be a victory scored or the Zionist dream perpetuated, then facts on the ground cannot continue to be ignored by the very officials who have the power to stop enabling biased decisions and aggressive actions against the Jews. The ongoing two-tiered system of justice we keep seeing needs to stop and sovereignty throughout Judea and Samaria must be applied.