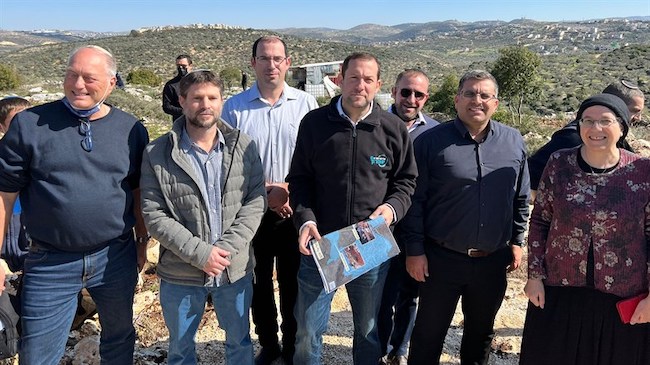 On Sunday morning, Religious Zionism party Knesset members toured western Samaria, focusing on areas in Area C that are de facto being taken over by Palestinian Arabs. Accompanying them was Samaria Regional Council Head Yossi Dagan, who told the MKs about the efforts being made to counter Arab encroachments.

At the start of the tour, Dagan noted that Arab encroachment includes the paving of new roads, erection of buildings – illegally constructed – and other actions. Also visited were State-owned lands near the industrial zone in Alei Zahav which Arabs have infiltrated. The group was also told about infiltration into the area around Bruchin.

Dagan added, “We will never give up on this land. This is our land – we are responsible for it on behalf of the Jewish People. If the government and other authorities are not fulfilling their obligations then we will be the ones to preserve this area. We will prevent this encroachment and put an end to this shameful situation.”

Local residents remain strong as they continue to wage a fierce campaign against these illegal takeover attempts. Now it’s time for Israel’s government to do the right thing and step in to protect its residents, its legally owned land – and SOVEREIGNTY. Prime Minister Bennett, what are you waiting for??