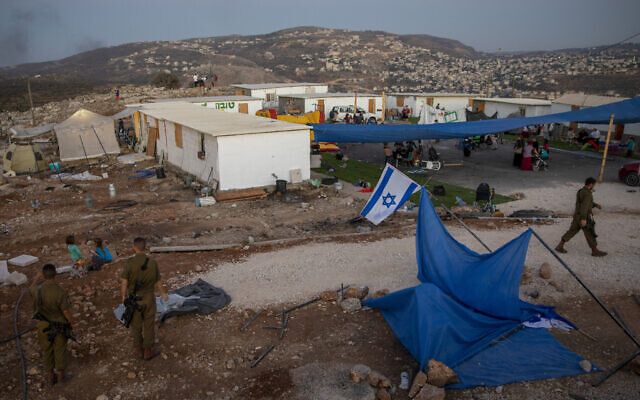 In his final hours in office as he retired on Tuesday, outgoing attorney general Avichai Mandelblit gave a green light to a deal between the government and Judea/Samaria community. This would retroactively authorize Evyatar without the need for a legal reason. The next step toward the establishment of a permanent yeshiva in Evyatar is the declaration of its land as state land.

A reminder: Prime Minister Naftali Bennett, in the early days after his government’s formation, had reached an agreement with Evyatar residents by which they would evacuate their homes in exchange for his promise to authorize a yeshiva and a “settlement” there.

The move pushes forward the plan, which still needs a final green light from Defense Minister Benny Gantz. Yair Lapid warned Bennett that going forward with this could damage Israeli relations with the Biden administration and provoke a harsh response from the international community.

Israel should exercise its Sovereignty and never bow to political pressure. The Land of Israel is the Nation State of the Jewish people. Evyatar was settled on legally owned land and Israel has every right to build it up. We are cautiously waiting to see Bennett not bowing to any foreign or internal pressure and fulfilling his promise.

Mandelblit said to have okayed illegal West Bank outpost just before retiring as AG, by AP and TOI Staff, February 2, 2022