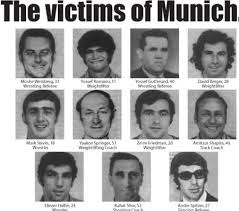 The Israel Forever Foundation is hosting a campaign to commemorate a day that will live in infamy, September 5, 1972.
On that day in…1972 in Munich Germany, 11 Israeli Olympians and one German police officer were killed in a devastating terrorist attack at the ’72 Olympic Games that was instigated by an organization called Black September.
Before the suicide bombings, the car rammings, the stabbings, the brainwashing of children to hate, THIS was the onset of Palestinian terror taking an international stage. This was the first event of its kind.The tragedies of September 5th are behind us, and there is nothing that can change the atrocities that took place. But it is our duty to honor the memory of those who were murdered and translate the lessons for today.
To help commemorate, they have created the Munich Memory Project, to harness the passion garnered throughout the world upon the murder of the members of the Israeli Team. Its aim is two-fold: to protect this memory for generations to come and to serve as an inspiration for others to learn from – for those around the world to collectively take pride in the accomplishments of fellow Jews.
Among the activities that are part of the commemoration, one can participate in a virtual moment of silence and sign the Munich Memory Virtual Memorial Wall.
You can learn all about the events of that heinous terror attack, the murdered Israeli athletes, the events leading up to it and its aftermath, and much more, here: