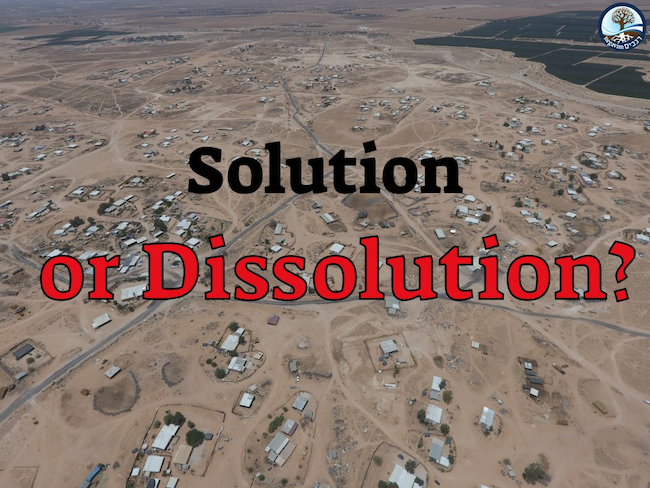 The details of the coalition agreements publicized in the media Monday evening reveal that Naftali Bennett and Gideon Saar are “not only failing to provide solutions but are exacerbating the problem,” with regard to governance in the Negev, the Regavim Movement warned.

Bennett and Saar have pledged in the coalition agreements to approach the Attorney General and demand that he cancel all fines and sanctions on illegal Arab construction. The agreement also calls for the freezing of enforcement against illegal construction for almost four years, and the freezing of the existing demolition orders for all illegal structures in the Negev that were built until the beginning of 2021. Mansour Abbas, head of the Islamist Raam party and a member of the emerging coalition, will be appointed a deputy minister and will receive half a billion shekels for distribution at his discretion. (Sound Kosher to you?)

Furthermore, the coalition agreements place both the Bedouin Settlement Authority and the Knesset’s Interior Committee, the key actors on the Negev issue, under the complete control of the left-wing bloc and Raam.

“Aside from approving the whitewashing of thousands of illegal structures on about 11,000 dunams of land to create ‘three new communities,’ the coalition agreements do not stipulate what will happen to the rest of the illegal Bedouin squatters’ camps nine months from now, and neither Bennett’s Yemina Party nor Saar’s New Hope Party will have the ability to influence the outcome in a government kept afloat by Mansour Abbas and the Islamist Raam Party,” Regavim stated.

Regavim has repeatedly warned that the state has lost its grip in the south and sovereignty in the southern region of Israel has been relinquished to an autonomous entity established by the Bedouins in the Negev. More and more illegal enclaves continue to spring up throughout the territory – and all the while, the Israeli government continues to turn a blind eye.