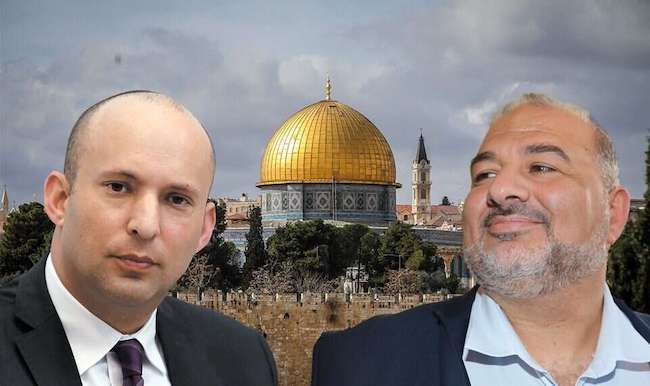 A number of lawmakers from Prime Minister Naftali Bennett’s Yamina party have expressed opposition to demands leveled by the United Arab List in exchange for its full return to the coalition.

Several Yamina MKs are opposing the UAL’s demands and stated, “As far as we are concerned, the UAL party can leave, we won’t tolerate their threats and their irrational demands for them to stay in the coalition. If they want to continue to help the Arab sector, great. If they want more than that, they have no place here.”

Sources reported that Bennett and UAL party chairman Mansour Abbas had reached a compromise under which UAL will end its self-imposed suspension from the government, restoring the 60-60 balance in the Knesset. As part of the deal, Bennett reportedly agreed to some of Abbas’ demands. One condition for the UAL’s return is that Israel consult with Jordan regarding any changes to policy on the Temple Mount.

If Bennett bows to Abbas’ demands it speaks disturbingly of Bennett’s continued willingness to appease the Arabs. Will violence on the Temple Mount cease totally if Abbas gets what he wants? Highly unlikely. This is truly a government in crisis that is not asserting it’s legal right to the Temple Mount. With Bennett’s leadership we could potentially see yet another piece of Israel being dangerously compromised.