We’ve learned that reports are now surfacing that Trump administration officials have criticized the UN Relief and Works Agency (UNRWA) as recently as this past Sunday. They’ve characterized the UNRWA organization as a fundamentally flawed, cash-strapped organization hampering Palestinian growth.

“The Nationality Law is a vital law that places a dam in the face of the ongoing erosion of the identity of the State as the nation-state of the Jewish People, preventing the State from becoming a state of all its citizens, or as we see now – a state of all its infiltrators. It placed a barrier before the process of bringing women from Gaza to infiltrate and preventing their removal.” 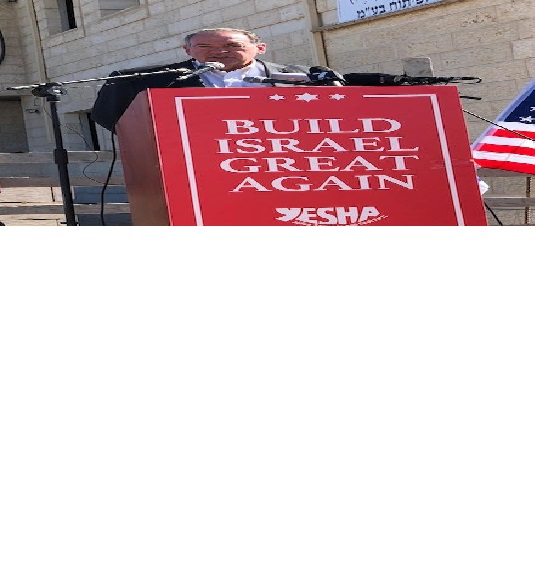 The Yesha Council and Huckabee celebrated the construction of 900 new homes, 600 of which are in the final stages of building.

On AFSI’s April mission trip we visited the wheat fields of Yitzhar with Ayelet and Akiva HaCohen whose drive and determination have created a very successful flour mill. Neighboring Arabs are constantly planning to burn down the fields. AFSI agreed to help with building a fire wall. Helen Freedman recently corresponded with Ayelet and Akiva to see if they were safe from the fires.

“Today we had another fire that the Arabs torched, this time closer to our house, but we weren’t worried because we knew the fire wall path that we paved with your contribution would stop it and that is exactly what happened!

Below are a few pictures of the fire stopping as it approaches the path and the security car on the path making sure it doesn’t pass it.”

Read about the squad of US firefighters who are volunteering (and not all are Jewish) to protect Israel’s south from the Hamas kite terror attacks HERE. Thank you!

EMET has launched a petition today calling on the US Administration to recognize Israeli sovereignty over the Golan Heights.

Because of the seven-year brutal Syrian civil war, the Islamic Republic of Iran has taken advantage of the situation, and Iranian-backed Hezbollah forces have penetrated as far south as the Syrian town of Quneitra. Iran is determined to build a land bridge stretching from Tehran to Beirut to Damascus and to the Mediterranean Sea.

A United States recognition of Israeli sovereignty over the Golan Heights is critical at this time, to ensure the safety and national security interests of the U.S. and Israel, and it would send a strong message to Tehran that their hegemonic aspirations must not go on, unchallenged.

Members of Congress have called for U.S. recognition of Israeli sovereignty over the Golan Heights, but it is important that the American people send a message to the Administration as well.

Right now Israelis are huddling in bomb shelters, trying to protect their families from Hamas terror rockets. They need to hear from us. Tell the Israeli people you are with them by adding your name at ISupport Israel

When 100,000 signatures are reached, the names will be delivered to the Prime Minister Netanyahu’s office.

Courtesy of The Israel Project

Two hundred activists held a protest on the ruins of Sa-Nur as part of a campaign to force the government to rebuild the community. Sa-Nur was one of four northern Samaria communities that the government destroyed in 2005 as part of its disengagement plan.

In AFSI’s July 23 newsletter, we first reported that the residents of the Sa-Nur and Homesh communities turned to leaders of the coalition factions, demanding that the Disengagement Law be approved to end these disgraceful expulsions from northern Samaria.

Dozens of Sovereignty Youth members from all parts of the country attended a special two-day seminar where they were exposed to the challenges of applying Israeli sovereignty in Judea and Samaria and various ways of coping with those challenges.

Sovereignty Movement co-chairwomen Yehudit Katsover and Nadia Matar sum up the seminar with satisfaction: “They proved again that they are aware of the significance of timing and the great importance of the mission on the shoulders of their generation, the mission of sovereignty. The youths were the ones who initiated the seminar and we designed the structure of the seminar together with them, which turned out to be much more than was planned.”

Sderot boasts the world’s largest underground fortified playground, extending 25,000 square feet and containing 300 tons of 25-gauge steel. This playground was and continues to be instrumental during intense rocket attacks that began before the Gush Katif expulsion of 2005. It’s become a hub for families, schools and visitors—a safe place giving the area’s residents a chance to feel at ease.

AFSI’s first reaction to this playground was one of disapproval. Why should the solution to the never-ending rocket attacks be that Jews go underground? Why not eliminate the attackers? It’s been at least 15 years since Sderot has endured this situation. Isn’t it time for it to end? Do hairsplitting legal advisers prohibit the IDF from wiping out the enemy because some legality or claims of human rights are violated? This is unconscionable since the lives and health of the citizens of Sderot and neighboring communities are under threat. The government must come up with a better solution than sending Jews underground.

The Knesset overnight Wednesday-Thursday passed into law the nation-state bill that for the first time enshrines Israel as “the national home of the Jewish people” in its quasi-constitutional Basic Laws.