Below is the full text of the Balfour Declaration of November 2, 1917: 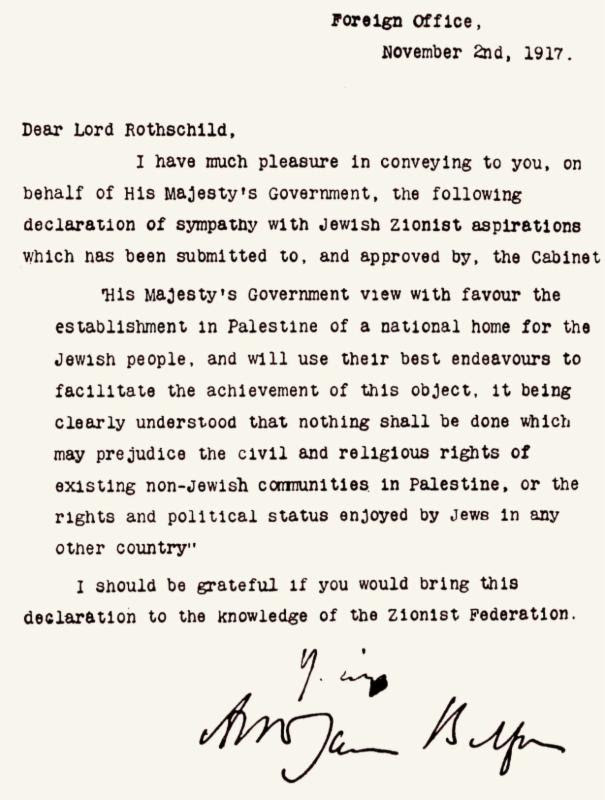 The Balfour Declaration may have been the impetus in the modern age leading to the re-establishment of the State of Israel. However, the Jewish connection to the Land of Israel goes back nearly 4,000 years. Two Temples were built in the Jewish capital of Jerusalem and subsequently destroyed, and a People was dispersed, only to return after 2,000 years of exile. In more modern times, the First Zionist Congress met in 1897, preceding the Balfour Declaration by 20 years.

The Jewish people are connected to the Land of Israel like no other people to no other land. Although today we are bombarded with fake news about who is indigenous, who was there first, etc., history has proven time and again that it is only the Jews who have a true connection to the Land.

The Balfour declaration led the way for international recognition, and we are thankful, as subsequent to it, it was inevitable that the Jews would once again call Israel their home.

Never in history has a people returned to their rightful home after such a long exile. May there never be another exile.

Clifford May has a thoughtful analysis of the Balfour Declaration and subsequent history in the Washington Times, accessible via this link:
The 100-year-old promise