Palestinian Media Watch (PMW) and American families of Palestinian terror victims, have initiated a call to the US government to deny entry into the US to Jibril Rajoub, the Fatah Central Committee Secretary:

PMW calls on US gov. to deny entry to terror supporter Jibril Rajoub this week

The invitation to Rajoub came from the Israel Policy Forum, an organization advocating for a “two state solution.” He is scheduled to speak in New York on April 5.

In the letter to Secretary of State Rex W. Tillerson, PMW notes that Jibril Rajoub publicly incited terror and glorified terrorists throughout the 2015-2016 Palestinian terror wave that claimed the lives of 4 American citizens: Hallel Yaffa Ariel, Taylor Force, Richard Lakin, and Ezra Schwartz. Rajoub also called on Hamas to kidnap Israelis in 2014, just a few months before U.S. citizen Naftali Fraenkel and his friends Gilad Shaar and Eyal Yifrach were kidnapped on their way home from school.

The US is committed to fighting terror, and that begins by preventing terror supporters from entering US soil. It is time to hold Jibril Rajoub accountable for his calls for murder.

AFSI supports PMW in calling on supporters to forward this to your contacts in the US Congress, administration, and media to help prevent the terror supporter Jibril Rajoub from entering the US, and to have him arrested should he arrive.

Please access the PMW website (click on link above) to read the full text of the letter sent to US Secretary of State Rex W. Tillerson, and to read in detail the reprehensible actions of Jibril Rajoub, whose incitement to terror led to the deaths of Israelis and Americans.

Families’ call to the US government:

We, the undersigned US citizens, are family members whose loved ones were murdered by Palestinian terrorists as a result of the Palestinian Authority’s and Jibril Rajoub’s incitement to murder. We join PMW in demanding that the United States, in accordance with US law, prohibit Jibril Rajoub from entering the US.

Should Rajoub arrive in the US, we call upon the Department of Justice to immediately arrest and investigate him for inciting terror that led to the murder of our loved ones.

David Friedman sworn in as United States Ambassador to Israel 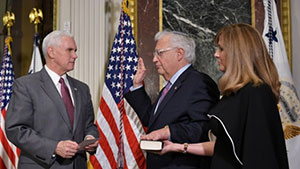 History was made yesterday, as David Friedman was sworn in as the 20th United States Ambassador to Israel.

Vice President Mike Pence introduced Friedman with words of congratulations and friendship, confirming the deep bond of friendship between the United States and Israel.

Ambassador Friedman put on his kippah, and with his hand on a Jewish bible and wife Tammy at his side, repeated the words spoken by Vice President Pence to be formally installed as Ambassador.

Friedman then thanked those who made this tremendous accomplishment possible, including President Trump, Vice President Pence, and members of his and his wife’s family.

All in all, an extraordinary accomplishment, one we should feel proud of.

David Friedman sworn in as the United States Ambassador to Israel.

The swearing in ceremony can be viewed here: 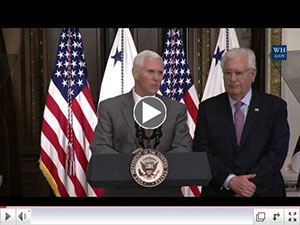