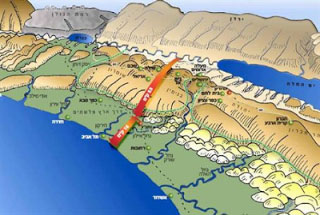 A simplistic yet realistic view of the narrowness of Israel’s “waistband”, and the topographic reality of the high land of Judea and Samaria overlooking Israel’s coastal plain

There is much news (and speculation) emanating from the Middle East and Washington regarding Israel, the “Palestinian” Arabs and possible “solutions” to the problems throughout the Middle East.

Does Trump really believe this?

Is any of this significant? Is President Trump planning to hold a mega-summit of Arab nations and Israel? Does he really believe he can solve the “ultimate problem” and make a deal for peace in the Middle East?

The “Palestinian” Arabs in Gaza continue building tunnels into Israel and upgrading missiles designed to hit Jewish population centers and cause maximum casualties and damage. Israeli leadership believes another battle with Gaza is not a matter of “if”, but of “when.” Mahmoud Abbas’ corrupt government situated in Judea and Samaria has done nothing to stop the demonization of Israelis and Jews in the press, their educational system and on the street. What they say about peace to the world in English does not match their speech in Arabic where they state the truth about their aims of destroying Israel. Hezbollah in Lebanon has more than 100,000 missiles aimed at Israel. Iran is attempting to open another front with Israel on the Golan.

Not exactly conditions ripe for compromise.

On the Israeli side, the population is finally coming around to the conclusion that peace with their immediate Arab neighbors is not feasible, at least not in the foreseeable future. Two recent polls indicate that more and more Israelis believe in the establishment of Israeli sovereignty in Judea and Samaria, with an overwhelming number against the establishment of a Palestinian state in the area of Judea and Samaria.

Jerusalem Center for Public Affairs poll: Preliminary Findings of a Survey of Israeli Jewish Attitudes on a Future Peace Agreement with the Palestinians

The Maagar Mochot poll taken by Women in Green and the Besheva newspaper:

Most Israelis support sovereignty over Judea and Samaria

AFSI’s position for years has been that it is time for Israel to assert sovereignty over Judea and Samaria. Anything less – ceding land, enabling the establishment of another Arab state – would constitute a mortal danger to the only Jewish state.

Yes, the times they are a changing, and there are indications that several Arab states are now willing to “tolerate” Israel as dictated by their best interests. But interests change over time, and the permanence of Israel cannot be negotiated based on ephemeral interests. 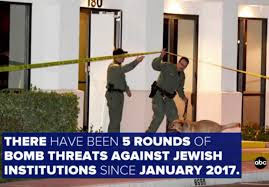 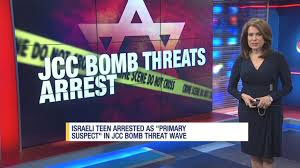 Since the election of Donald Trump there has been a rash of bomb threats against Jewish institutions throughout the United States. The mainstream/leftist media immediately hyped the line with certainty that this supposed increase in anti-Semitism was specifically due to Trump’s election, by energizing and spurring on right wing, white supremacists. This, without a shred of evidence.

This “certainty” was totally destroyed with the recent arrest of a Jewish American-Israeli teen in Israel. It turns out this individual made bomb threats against all different types of targets, specifically looking for media attention. If the media ignored them, he would seek out different targets for his threats.

He struck gold when he initiated his latest round of targeting Jewish institutions, not because they were Jewish – he had targeted Jewish institutions in the past with minimal media response. However, with this series of bomb threats right after the election of Trump, the media found payday in hysterically promoting the line that the threats were made by right wing, white supremacist fanatics. The more the press promoted this, the more the teenager phoned in threats to Jewish institutions.

How wrong the media were, in what turned out to be just another attempt to smear and destroy Donald Trump and the Republican victory.

What makes this episode particularly pathetic is how left wing Jewish organizations, such as the ADL, jumped on the bandwagon claiming it was right wing anti-Semitism.

With the truth glaringly displayed for all to see, have the accusers of President Trump expressed remorse? Have they issued any apologies?

Evelyn Gordon has a thorough analysis in Commentary (subscription required):

The Real Trump Link in the Threats on Jews.

If you cannot access the entire article via the link above, it is available here: The media:The Real “Trump Link “in the Threats on Jews….How media created the climate of hate 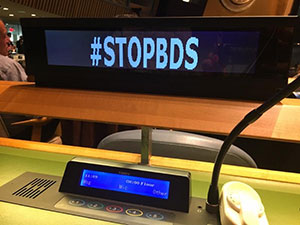 The Israeli Mission to the United Nations hosted its second summit against the Boycott, Divest and Sanction movement at UN headquarters earlier today.

Danny Danon opened the event by saying: “The halls of the UN are now being infiltrated by the boycott movement. The UN’s Human Rights Council is creating a blacklist of companies and corporations operating in parts of Israel. This is pure anti-Semitism and together with the US, our greatest ally, we will keep fighting until BDS is eliminated.”

Nikki Haley was the keynote speaker and said, “The effort to delegitimize the state of Israel being waged on college campuses and the anti-Israel obsession at the UN are one in the same. They both seek to deny Israel’s right to exist. They are both efforts to intimidate her friends and embolden her enemies. They are both extensions of an ancient hatred. And how tragic is it that, of all the countries in the world to condemn for human rights violations, these voices choose to single out Israel. Iran, Syria, North Korea and other barbaric regimes are excused by the BDS movement. It makes no sense. And it has no connection to any reasonable definition of justice.”