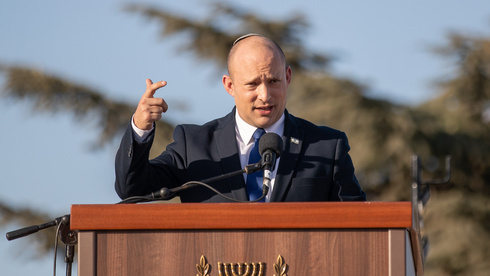 Stung by accusations that his government’s policy on Iran endangered the country, Prime Minister Naftali Bennett took a tough stance Wednesday, vowing that Israel would not hesitate to take any measures to defend itself.

“Israel will not restrain itself when ensuring its security,” said Bennett at the memorial service for the founder of modern political Zionism, Theodor Herzl, at the Jerusalem site that bears his name. The State of Israel will always defend itself,” he said. “We will act resolutely and continuously against any emerging threats, both within and without.”

Bennett was speaking after Opposition Leader Benjamin Netanyahu claimed that Foreign Minister Yair Lapid had promised the U.S. a policy of “no surprises” regarding Israel’s response to the Iranian threat. Netanyahu claimed this could pose a serious threat to Israel’s security.

Bennett also downplayed reports of internal disputes in his patchwork coalition, made up of eight parties from across Israel’s political spectrum, saying that there was broad consensus on most issues under consideration.

“We are learning how to manage our disagreements. We are managing to understand what we do agree on, and that’s a lot. Most of the things that have an impact on our lives are agreed upon by all of us, so we can move forward quickly and harmoniously.”

Whatever kinks Bennett’s coalition is working through, we pray they are all in 100% agreement that Iran can never obtain nuclear weapons. That should be obvious to all.

Source:
Bennett: Israel will not restrain itself when defending itself, by Gilad Cohen/Ynetnews.com, July 1, 2021