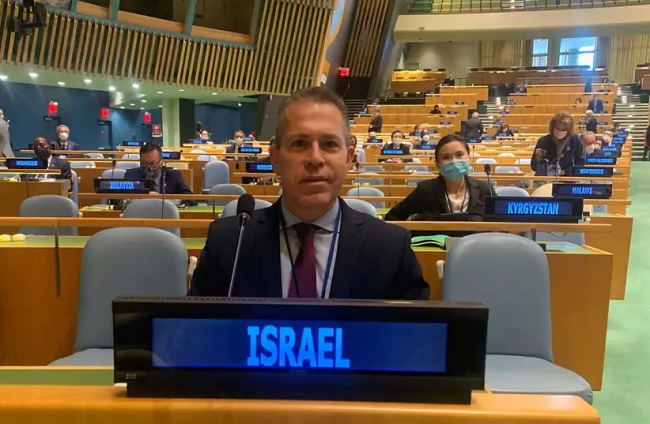 Israel’s Ambassador to the United Nations Gilad Erdan announced that he will lead a campaign to expose the United Nations Relief and Works Agency for Palestine Refugees in the Near East (UNRWA) illegitimacy and its detrimental effect on peace in the Middle East.

Erdan, who began his tenure at the UN week ago, participated in a discussion with UNRWA head Philippe Lazzarini and demanded that he “end the incitement and anti-Semitism in UNRWA schools and publicly pledge to eliminate any terrorist infrastructure in its buildings.”

UNRWA staff has been embroiled in anti-Semitism scandals while its facilities have repeatedly been found to be used as weapons caches by terrorist organizations in the Gaza Strip.

“I will lead a campaign in the UN to show UNRWA’s donor countries and the entire world the real reason there is no political process: Palestinian incitement denying the Jewish connection to the Land of Israel while demanding the Big Lie of the return of Palestinian ‘refugees,’” Erdan stated Tuesday.

Separately at the UN, Erdan slammed the election of several countries with poor rights records to the U.N. Human Rights Council.

“Today’s Human Rights Council elections prove once again that this council has nothing to do with protecting human rights and everything to do with violating them. Since 2006, the council has adopted 90 resolutions condemning Israel, more than all the resolutions against Syria, North Korea and Iran, combined,” he said in a statement.

“The obsessive focus on Israel, along with its protection of oppressive, dictatorial regimes, shows that the Human Rights Council is in the business of white-washing the crimes of these countries,” continued Erdan. “I call on all democracies that are still members of the council to immediately resign from this shameful and anti-Semitic body.”