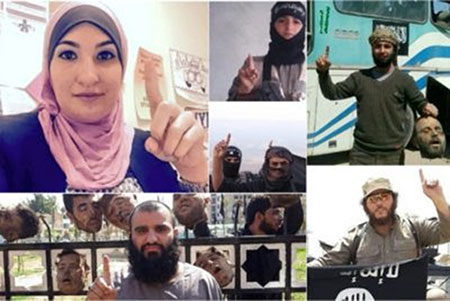 By now, we are all aware (or should be) that anti-Israel, anti-Zionist Linda Sarsour has been invited to be the commencement speaker at the CUNY Graduate School of Health Policy graduation on June 1.

The invitation should never have been extended and should be rescinded, although there is no indication yet that it will be.

The battle to rescind the invitation is not over, but so far it looks like CUNY officials are digging in their heels. Many public officials and other notables in New York City and elsewhere have spoken up, providing clear evidence why she should not be given the privilege to speak at a publicly funded university.

Assemblyman Dov Hikind has been outspoken in his opposition to her speaking, including his recent piece in the New York Daily News:

Disgustingly, Councilman Brad Lander (who is Jewish) spoke out in her favor. Please contact him to protest his position. He can be contact via the following:

And today, Jeffrey Weisenfeld has a piece in today’s Forward that is a must read:

Here, Weisenfeld ascribes Jewish support for Sarsour to the mantra of Tikun Olam, or “repairing the world.”  Tikkun Olam is the clarion call for mostly leftists Jews, who use it to call for social action for all others, except their fellow Jews.

As he writes, As Jews, we end up advocating for our enemies and expect no reciprocity, nor receive it; I call it, “Tikkun olam for thee, but not for me.”

There is much more in his piece.

Please refer to our entry in the AFSI Calendar of Events below, calling for a protest on Tuesday May 16, against Sarsour’s speaking at the CUNY commencement.

– Praised Ramsea Odeh, a convicted PFLP murderer of two Jewish Israelis, at a Chicago convention a few months ago.

– Praised Arab rock throwers in Israel and encouraged more rock throwing by Tweeting, “It is the definition of courage.” This statement was accompanied by the picture of a child with a rock in his hand.

– Stated that women cannot be Zionists and Feminists.

– Advocates for hate, violence and the destruction of the only democratic country in the Middle East, Israel.

Israel’s 69th year of independence as a modern state by Jews and for Jews causes us to reflect on the words from HaTikvah “LeHiyot Am Chofshi b’Artzeinu”, “to be a free people in our land”. Though penned in 1878 by Naftali Herz Imber, these words ring truer today than ever. With blood and bravery, Israel became physically independent again as a sovereign nation in 1948, but the question is, Are we Jews free in our homeland Israel today in 2017? As defined, freedom means the absence of coercion or constraint and liberation from the power of another. The true fulfillment of Zionism besides fostering the unity of the Jewish people and centrality of Israel to it, is the strengthening of the State, the preservation of the identity of the Jewish people and its connection to the Land, and protection of the rights of Jews. Despite its burgeoning economy, its highly-developed sectors of military, tech, agriculture, education, and arts, Israel is not free.

Israel is not free because in its midst festers a cancer whose national identity is solely predicated on killing Jews, namely the Arabs of the West Bank and Gaza (WBG) under the PA and Hamas. What should we conclude about: UN funded textbooks for WBG Arab children that eradicate Israel from the map; that deny the Holocaust; that eulogize and honor the names of terrorists; that teach children to become martyrs and stab Jews; that UNESCO attempts to erase history and delegitimize Israel by “voting” to reject Israel sovereignty over Jerusalem; that votes to deny the Temple Mount as a Jewish historical and religious site; that the PLO and Abbas, truly Amalek in our time, causes gullible Jews to stumble by propagating the lie that Israel can achieve “peace” through the forced failed Oslo Accords, and who orchestrates payments of millions of dollars to families of terrorists; of “Jewish” NGOs (Breaking the Silence) that seek to destroy Israel from within, funded by millions from EU nations to criminalize the IDF; that support the Hamas “war crimes” charges versus Israel (B’Tzelem) and “Rabbis for Human Rights” which assists in charging Israel with “war crimes”; that US-based New Israel Fund support NGOs like Breaking the Silence, Adalah and 972 Magazine that repeatedly call Israel an apartheid state and openly support BDS; that J street is pre-occupied with Israel as “occupier” of land illegally occupied by Jordan, but legally set aside for Israel by the League of Nations, UN, and above all, the Torah; that J street fights against anti-BDS legislation in the US, countered funding for Iron Dome and supported Obama’s treacherous Iran Deal; that J street promotes Jewish Voices for Peace, a virulent anti-Zionist pro-BDS hate group?

The Palestinian Authority is in political and monetary chaos. Abbas is corrupt, hated by his people, and Hamas. Not since the Madrid conference in 1992 has Israel seen an opportunity to permanently set its borders. Freedom for Israel means annexing Judea and Samaria, deposing Abbas, and creating the real “2 state solution”, where WB Arabs can be repatriated with their brethren in Jordan, 2/3 of historic Palestine. The Oslo Accords side stepped the “Jordan is Palestine” option, but since the PA never signed the Oslo Accords and the PLO never removed clauses in its Covenant about Israel’s destruction, Israel has no obligation to it. Oslo failed because the WBG Arabs simply do not want to stop killing Jews and oppose Israel’s existence. Oslo was intended to never “work”, but to destroy Israel. Not billions of dollars from the UN, EU, US or any other entity can coerce the Palestinians to make peace since it will end “Palestinianism”, as noted by Israeli historian Moshe Dann.

For true independence, Israel must free itself from Oslo, free itself from EU and UN pressure, from “Jewish” anti-Israel NGOs, from the “Exile guilt” of J street and NIF, from UNESCO and UNRWA. Israel must act freely to exercise control over the land it rightfully liberated per international law and the Torah. Justice Minister Ayelet Shaked recently said it is time to apply Israeli law to the liberated lands of Judea and Samaria. Worried that these Arabs will refuse/protest/object? A poll published 3 weeks ago by the Jewish People Policy Institute noted that a whopping 74% of Israeli Arabs “feel comfortable” or “very comfortable” living in Israel. 69 years after being vanquished in war, these Arabs have become integrated as a fully functional minority via educational and employment opportunities. They see the fruits of Israeli living. Their citizenship is Israeli and they accept Zionism. If they hated it, they would move. They don’t.

After annexing Judea and Samaria, the same law will apply to Arabs there. Should they reject living in peace with Jews, they are free to leave. Repatriation to surrounding Muslim countries, especially Jordan, can help them fulfill their political aspirations for Palestine. Historically, large populations can move. The EU wishes to integrate millions of Muslim refugees. India and Pakistan swapped millions of people. American Indians migrated thousands of miles from Siberia across the Bering Bridge to North America. It would be a far lesser task to integrate 1 million Arabs 10 miles to the east of the Jordan River, with the same language and customs. Are the WB Arabs any less capable of migration to Jordan just as millions of Jews moved from Europe and the Middle East into Israel over the past 150 years? 1 million Arabs are already citizens and integrated slowly but willingly since 1949. So too, now for the Arabs of 1967. Accept Jewish sovereignty or move. “Ein brera”, as per Golda Meir. Wars have winners and losers, and Jews decided to stop losing in 1948. Israel must be proud of all its victories, and it must stop refusing to win with Oslo. Without Hebron, Shechem, Bethlehem and Jerusalem, there is no Jewish people.

This past week’s Torah portion of Acharei speaks of the holiness of the Land of Israel, where certain violations lead to the Land disgorging its inhabitants. Hashem warns against the immorality of Molech and its contemptible practice of sacrificing its children into bonfires, which lead to the Divine expulsion of the Canaanites from the Land. Israel must follow through on the Divine call to disgorge the “Palestinians” from our Holy Land for their emulation of Molech by raising their children to be consumed by the fire of suicide martyrdom. Israel’s current trouble with the PA/Hamas can thus be viewed as self-inflicted by trying to settle with an immoral people instead of disgorging them from the Land. Then Israel can be free.

Arizona Chapter Chairman of Americans For a Safe Israel