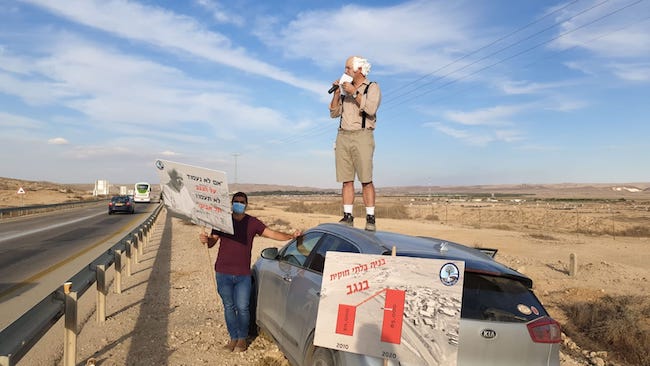 Brigadier General Ghassan Alian, Commander of the Civil Administration, during a hearing in the Foreign Affairs and Defense Committee: The Palestinian Authority employs hundreds of people to register real estate in Judea and Samaria – including in areas under full Israeli control, while the Civil Administration has only about 20 people dealing with this issue.

Alian’s remarks were made in the context of this morning’s (Monday) Foreign Affairs and Defense Subcommittee hearing, chaired by MK Gideon Saar. The hearing, initiated by MKs Uzi Dayan, Moshe Arbel, Yitzhak Pindros and Bezalel Smotrich, examined the renewal of land registration and regulation procedures in Judea and Samaria.

Meir Deutsch, Director General of the Regavim Movement, who participated in the hearing, says that the data provided by the Civil Administration reflect the Israeli government’s operational, organizational and moral bankruptcy.

The Regavim Movement in a protest demonstration at the entrance to the Ben Gurion State Memorial Ceremony in Sde Boker: “85,000 illegal structures – not in Ben Gurion’s vision for the Negev!”

Regavim activists prepared a special reception for Prime Minister Netanyahu, upon his arrival at the state memorial service for David Ben-Gurion in Sde Boker.

At the entrance to the complex, signs were hung indicating that in the last decade, 35,000 illegal structures had been added to the Negev’s alarming tally of lawlessness.

Next to the signs stood “David Ben-Gurion,” who read excerpts from Ben-Gurion’s historic speech of 1948, interspersed present-day data.

“What are we defending? I can not accept the suggestion that we refrain from protecting our interests in the desert – precisely because we must defend Tel Aviv. If we do not take a stand in the Negev – Tel Aviv will not stand.”