This past week was filled with action-packed political drama, most of it taking place in Washington, D.C. We witnessed:

– The much anticipated press conference with President Donald Trump and Israeli Prime Minister Benjamin Netanyahu, followed by additional meetings and press conferences. There was much ado about “x-state solutions” and “settlement” growth, as President Trump appeared to pull back on decades of U.S. policy promoting that infamous “two-state solution.”

– Yesterday we saw a three and a half hour interrogation of President Trump’s nominee for Ambassador to Israel, David Friedman. He was certainly intelligent and composed, but there was considerable brouhaha at his stating that he is in favor of that “two-state solution”, and his willingness for the sacred Jewish town of Bet El to be under “Palestinian” jurisdiction, if there was ever an agreement between Israel and the “Palestinians”.

– Yesterday also witnessed a press conference at which President Trump said he inherited a “mess”, and that “I have never seen more dishonest media, frankly than the political media.”

– And there was the following:

– The decision by Trump’s pick to succeed Flynn, Vice Admiral Robert Harward, to turn down the job;

– A report that U.S. intelligence agencies are keeping material from President Trump;

– The dropping out of Trump’s candidate for Labor Secretary, Andrew Puzder;

– The Trump administration stating its decision to rescind the executive order that banned immigration from seven Muslim and predominantly Muslim countries, and replace it with a new executive order;

With all this going on, we thought that before the weekend and the Jewish Sabbath, we would take a step back from the news and present this incredible article from 1969, two years after the Six Day War: Our question is: Now that it is almost 50 years since the Six Day War of 1967, has anything changed? Decide for yourself.

See the Hand of G-D!

By The Lubavitcher Rebbe in 1969 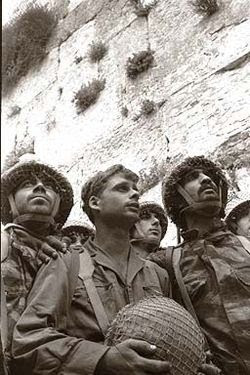 The Tenach [Kings 1, 20.32] tells us of the Seven Day War which took place at the time of Ahab the king of Israel. Hadad King of Aram went out to war against Israel earning him a great defeat, leaving him thinking that never would he recover. Regardless, Ahab ran after him begging him to sign a peace treaty. The King of Aram’s hate for Ahab was so deadly that could not understand how Ahab would wish to make peace with him.

His advisers explained to him that the Jewish nation is a nation of pity and kindness; that should they be asking for peace, they will make peace with you. After much persuasion Hadad agreed and send his representatives to Ahab and together signed a peace treaty from which there were disastrous results as documented there at length.

Two years ago there took place a similar re-occurrence at the time of the Six Day War. The IDF smote the Arabs a resounding defeat sending them fleeing in fear. Yet, regardless, Israel ran after the Arabs [via the USA] literally begging them: come, sit with us round the table, let’s make peace. It is now two whole years that they are running after the Arabs begging them to agree to sit together to make peace! In return Israel is prepared and promises all the land they could possibly wish for. Yet, the Arabs are reluctant to meet with the Jews, arguing: we have enough problems of our own – not interested – not in your goodness nor in your evil, “neither your honey nor your sting” [Midrash Tanchuma].

There is taking place something wondrous with no natural explanation. In spite of the fact that it is now two consecutive years that Israel is begging the Arabs to sit down with them; the Arabs have nothing to lose but only to gain, regardless, they will not agree. They are prepared to forgo half of the country that Israel wishes to give away to them on a silver platter; but from their perspective, the main thing is not to sit down with a Jew!

This strange situation has only one possible explanation: that which is taking place is a repeat – the hand of G-d as at the time of the Exodus of the Jewish People from Egypt when “G-d hardened the heart of Pharaoh” [Exodus 9. 12] [not to release the Jewish People from Egypt]. They have absolutely no reason for their reluctance to sit together with the Jews having nothing to lose.

It is G-d alone Who is hardening their hearts.

The weakness shown by Israel towards the Arabs after the wondrous victory of the Six Day War did not end with their call to sit down, talk peace and offer to give away half of the country.

The rulers of Israel wish to divide up the Holy city of Jerusalem, that the city belong to the Muslims, Xtians, and [finally, as an afterthought] “also” to the Jews. It does not end there: they are actually encouraging Arabs to dwell in Jerusalem. This, despite the fact that Jerusalem has belonged exclusively to the Jewish People since ancient times. Already from the days of Shem the son of Noah [Noah who divided the earth among his three sons after the Great Flood], to Abraham our Patriarch [when G-d promised the Land to him and to his progeny], and finally the conquest of Jerusalem by King David.

Additionally, there is an explicit Jewish law which states that a gentile may not live in Jerusalem – that this will bring him no good. This law however can only be enforced when the hand of the Jewish People is empowered [Talmud Ketubos 26.2, Bava Kama 97.2], However, this does not mean that they need to encourage Arabs to remain living there, and certainly not to pursue them, begging them to remain there!

This weakness of falling before the Arabs is the cause, that if until now there was a situation of fear of the Jewish People, now, at this time, as a direct result of pursuing them, we have arrived at a situation that they raise their heads against Israel and are increasing [May G-d protect us] their terror attacks.