Interior of Berlin synagogue after Kristallnacht, 1938

Arutz Sheva reports,
A German regional court has ruled that an attempt by three Muslims to burn a synagogue was motivated by ‘anti-Israelism’, not anti-Semitism. The perpetrators will not be jailed.
The ruling is akin to a “carte blanche for attacks on Jews,” and is itself anti-Semitic, according to the European Jewish Congress. The organization reacted with “outrage and disbelief” to the decision.
The German court in the city of Wuppertal, affirming a lower court decision, ruled that a violent attempt to burn the city’s synagogue in 2014 was a justified expression of criticism of Israel’s policies in Gaza.

This verdict from the country that produced the world’s largest factories of death in history?
Read it all here: German court justifies synagogue attack

The Messages from Yesterday’s Rally Resonate Around the World 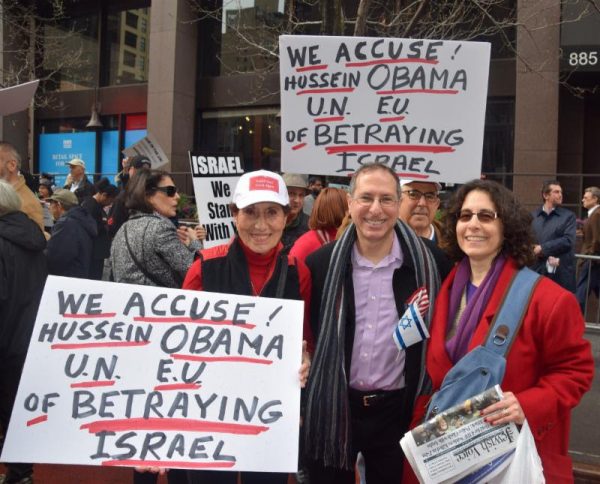 Yesterday’s rally in front of the French Mission to the United Nations attracted hundreds of protesters, and drew the attention of the press from all over, including Israel. Articles about the rally were posted in Arutz Sheva, the Jerusalem Post, Times of Israel, and even Haaretz.
The countries of the world are now forewarned that the Jewish people and all supporters of Israel will no longer be silent in the face of danger from our enemies, including the danger that may emanate from this Sunday’s “peace” conference in Paris. We shall continue to speak loudly and forcefully to promote and protect our interests.
Many spoke loudly and forcefully at yesterday’s rally. These included, Hillary Barr, Jeffrey Wiesenfeld, Sarri Singer, Dov Hikind, Rabbi Mark Wildes, Lauri Regan, Rabbi Shmuel Goldin, Avi Posnik, Mohr Keshet, Gidi Grinstein, Yaacov Morgenstern, Michael Cohen, Shmuley Boteach and of course, AFSI’s Helen Freedman.
The key messages included:
– How dare the French (and the rest of the world) with their horrible history, decide Israel’s future?
– The upcoming Paris summit will place inordinate demands only on Israel, while giving the Arabs a pass.
– Israel continues to be the “canary in the coal mine.”
– With so much violence around the world, including at least 500,000 civilians killed in Syria and tens of millions of refugees from the Middle East and elsewhere, the UN should not be focusing on Israelis who are building apartments, but on those other much greater issues confronting humanity.
– The US should stop funding the UN
– It is Israel that has sovereignty over the land of Judea and Samaria, not some made up people who call themselves  “Palestinians”.
– Jerusalem is mentioned more than 600 times in the Bible, but not once in the Koran.
– UN Resolution 2334 led directly to last Sunday’s terror attack that killed four young Israelis.
– The only shining beacon of democracy and light in the Middle East is Israel.
– What part of “From the River to the Sea” and “Go back to the ovens” do Obama and Kerry not understand?
Finally,
WE STAND WITH ISRAEL! AM YISRAEL CHAI
Help Keep Israel Safe – Donate Now
Scroll to top