AFSI’s annual Ze’ev Jabotinsky Memorial Conference, held on Thursday evening, August 3, was sponsored in conjunction with the Nordau Circle, with the very welcome addition of Students Supporting Israel from Columbia University. Park East Synagogue in NYC was the setting for the standing room only crowd of over 200  who listened intently to the powerful speeches of our guest speakers.
AFSI Co-Executive Directors Helen Freedman and Judy Kadish kicked off the evening with nods to Chairman Mark Langfan and acknowledgement of the dedication of the evening to AFSI’s Founder and Chairman, Herbert Zweibon, z”l.  Following the singing of the  American and Israeli anthems, Rabbi Harold Einsidler of Park East Synagogue chanted the Jewish Memorial Prayer for Jabotinsky.
The program featured two Israelis of note: Ambassador Dani Dayan, Consul General of Israel in New York was the featured speaker. His presence greatly enhanced the evening. David Hatuel, former resident of Gush Katif, whose pregnant wife and four daughters were brutally murdered by Arab terrorists in 2004, spoke to the crowd in Hebrew. Dror Vanunu, Gush Katif Representative, translated for him.
Ambassador Dayan’s message, citing Jabotinsky’s 1923 “Iron Wall” speech, was riveting. He emphasized that if people had listened to Jabotinsky’s words, that there could be no peace with the Arabs, and that the only way to deal with them would be by creating an “iron wall” of strength, many lives, and much time and energy could have been saved, and could still be saved.
David Hatuel’s pregnant wife Tali, and her four children, were murdered in 2004, the year before the Sharon decree to expel the 9,000 Jews from the 21 communities of Gush Katif. Sharon, who had campaigned on the fact that Gush Katif was the security belt for southern Israel, and was recorded stating that Gush Katif and Tel Aviv were equally vital to Israel, had totally reversed himself. Not only did the expulsion take place, with Israeli soldiers, tanks, and demolition crews entering the communities, physically removing the residents, and destroying everything, but the promise that afterwards ‘THERE WOULD BE A SOLUTION FOR EVERY FAMILY” was blatantly broken.
This August, 2017, twelve years after the expulsion, David Hatuel, his new wife and five children, along with the members of the former Katif community, are still living in caravans, or trailers. Is this an “Iron Wall” of strength and support for the Jews of Israel, or a cowardly betrayal with false promises?
David is fundraising so that a new synagogue can be built in memory of Tali Hatuel and her children. The KARMEI KATIF Synagogue would be located in the new Karmei Katif community in Lachish, where David and his neighbors hope to finally build and move into permanent homes. Those wishing to contribute to this effort should contact AFSI: 212-828-2424. Tax deductible checks can be made out to Friends of Gush Katif and mailed to AFSI at 1751 Second Ave., New York, NY 10128.
After the singing of the Beitar Anthem, and two beautiful songs sung by Rebecca Teplow,  Dalia Zahger, Vice President of Students Supporting Israel, Columbia University, was introduced. While invoking the name of Jabotinsky, she updated the crowd on the status of pro-Israel activity on college campuses and the challenges faced by Jewish and pro-Israel students today.

The Jordanian Option: Jordan is Palestine

For those unfamiliar with Middle East history,
the map below speaks for itself!

The mandate for a Jewish nation in Palestine originally included what is today Jordan.
The British lopped it off and gave it to the Arabs, thus eliminating 77% of the land meant
for the Jewish nation. 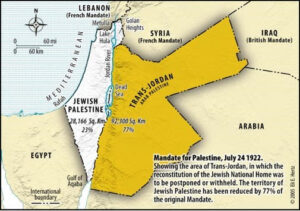 This video is a must-watch!
An interview with Mudar Zahran 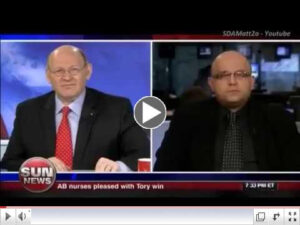 If you are in Jerusalem on Tuesday, October 17, check out the JORDAN OPTION conference at the Menachem Begin Center.
See AFSI’s Calendar of Events below for details.