Last week we posted a video titled, Why No Peace? It Takes Only 13 Seconds To Explain. Unfortunately, there is no shortage of videos or other media showing the true intent of the Palestinian Arabs.
One organization that studies Palestinian society from a broad range of perspectives and maintains a media repository of their findings is Palestinian Media Watch (www.palwatch.org). Over the years, PMW has amassed thousands of videos and other material showing Palestinian intent to indoctrinate its people with hatred toward Israel and Jews, and the “glory” one can attain by achieving martyrdom through the murder of Israelis and Jews.
On March 8, 2016, U.S. Army veteran Taylor Force, who was neither Israeli nor Jewish, was murdered in Israel by a Palestinian Arab from Qalqilya. Force was an American MBA student at Vanderbilt University and was touring Israel with a group studying global entrepreneurship. Eleven others were injured.
Palestinian Arabs reacted predictably:
Fatah, the party of Palestinian leader Mahmoud Abbas, posted a statement online praising the attacker as a hero and a “martyr,” and suggested such attacks would continue “so long as Israel does not believe in the two-state solution and ending its occupation.”
Hamas said is a statement: “We applaud the courageous attacks in Tel Aviv, Jerusalem and Yafo. This is proof of the failure of all the conspiracies meant to eradicate the intifada, which will continue until its goals are achieved.”
Islamic Jihad Movement in Palestine also praised the attack, and said that the continuation of the attacks sends a clear message to those who are doubtful, proving that the intifada is continuing and growing more intense.
These reactions have been documented fully, and proof of their validity can be found on PMW’s website. Here is one such video: 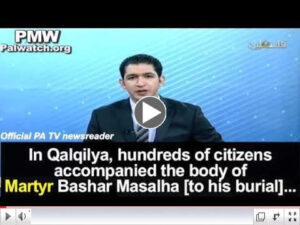 We bring this up now because the United States Senate is finalizing a bill titled the Taylor Force Act. This legislation would cut off U.S. funding for the Palestinian Authority over its compensation program for terrorists and the families of terrorists. Of course, PA leadership is vociferously against the bill, and has pledged to continue paying those “martyrs” serving time in Israeli prisons.
The legislation has already gone through several versions which have resulted in it being watered down, to the satisfaction of the Palestinian Arabs, and consternation of those opposed to any financial aid being distributed to murderers of Americans. The United States currently gives the PA nearly $500 million in aid annually, and the legislation passed in the Senate Foreign Relations Committee last Thursday would allow only the portions designated for security assistance – roughly $60 million – and humanitarian aid to remain in place. (In 2016 the U.S. provided roughly $350 million to UNWRA of which $95 million was earmarked for the West Bank and Gaza, and $300 million in humanitarian aid to the PA through the USAID program. Click HERE for the humanitarian aid breakdown as summarized by the Times of Israel). This version gained the support of Senator Chuck Schumer and AIPAC.
We fail to see how the “humanitarian aid” provided to the PA can be prevented from being distributed to the terrorists in Israeli prisons. Will there be mechanisms in place to guarantee that this aid will be used only for reliable humanitarian purposes? Or will the U.S. accept what can only be defined as “credible attempts” on the PA’s part to limit violence, to keep the aid flowing?
Today, the Trump administration, although offering cautious support for the Taylor Force Act, stated that the bill better not interfere with efforts to forge a peace agreement between Israel and the Palestinian Arabs (as if the Arabs are actually interested in peace.)
White House says bill cutting PA funding must not harm peace efforts
The bill is a work in progress. It must be passed by the Senate, sent to to House, finalized, and then voted on. It will most likely continue to be modified as it moves forward.
In the meantime, here is a summary of the bill’s key issues:
– Funding for humanitarian efforts and security cooperation would not be interrupted.
– An escrow account would be established for aid dollars in the event that aid would be cut. That escrow period would last one year.
– The bill would not include a waiver that would grant the U.S. president the ability to disregard the law on national security grounds.
– All Republican Senators on the committee voted for the bill.
– New Jersey Democratic Senator Cory Booker, bowing to Arab pressure, voted against the bill. Three other Democratic Senators also did; they are: Chris Murphy (Conn.), Tom Udall (N.M.), and Jeff Merkley (Ore.). SHAME ON THEM. TERRORISM MUST NOT BE REWARDED!
Help Keep Israel Safe – Donate Now
Scroll to top