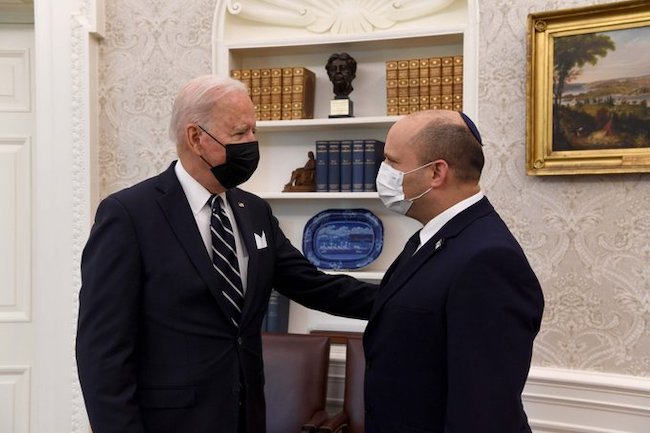 The joint statement of the President of the United States and the Prime Minister at the end of the meeting between the two emphasized a broad consensus between the parties on various issues, especially with respect to Iran and its nuclear armament.

However, on one issue Biden and Bennett agreed not to agree: construction in Judea and Samaria. It was decided that the Americans would not put pressure on Israel regarding the matter, and that Israel would not build there in a massive way. The status quo will continue as it was in previous governments. Biden, however, remains committed to the two state “dissolution”, which must be unacceptable to any sane Israeli government. Bennett, in his eagerness to please, does not appear to have made this point.

During the meetings in Washington, President Biden ordered the promotion of Israel’s entry into the visa waiver program, which, while not in effect yet, would serve both US citizens and Israeli citizens seeking to enter the United States.

This did not appear to be a news breaking meeting between the two. Niceties were exchanged and assurances of friendship and general statements in support of Israel were made. The burning issue of the US recognizing Israel’s legal right to build in Judea and Samaria, once again, received no support from the US.