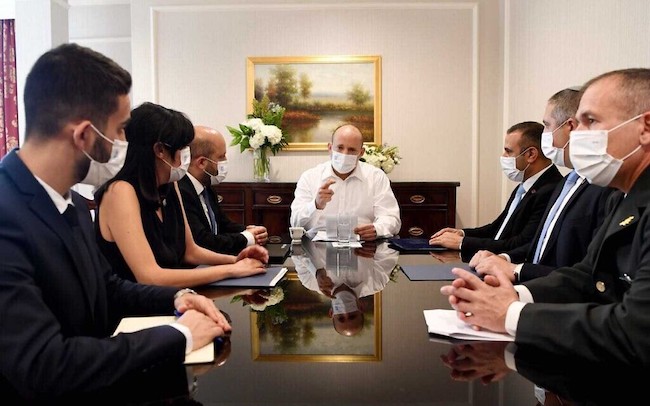 The White House announced that the first meeting between Biden and Israeli Prime Minister Naftali Bennett scheduled for today is postponed due to the deadly suicide bombing at Kabul airport in Afghanistan. The meeting will take place Friday.

Bennett and Biden were slated to discuss security cooperation and regional challenges facing the US and Israel, including the Iranian nuclear threat. Bennett’s goal is to reach shared principles on countering Iran with Biden – preferably with a public statement – such as never letting Iran attain a nuclear weapon instead of just “not on my watch,” as Biden has said in the past. It was also Bennett’s intention to let Biden know he wants stability in the region and not two states.

As of this writing 60 people were killed in the Afghan terror attack, 13 of the casualties were US soldiers. More than 150 are wounded or in critical condition. Shortly after this, the US Pentagon confirmed that a second explosion occurred at Kabul airport’s Abbey gate. As of 2:15pm today a third explosion and gunfire were reported.

Israel’s safety is foremost on our mind. Biden and his advisors have created a deadly situation and enabled the galvanization of terror. He’s made a mockery of the United States and we have yet to hear any appropriate statement reassuring us things are under control. His weak and incompetent “leadership” left behind in Afghanistan brand new American weapons – weapons of war – worth billions of dollars (Humvees, military helicopters, F-15s). Those critical military assets are now in the hands of the terrorist Taliban and this represents an enormous threat to Israel and the entire Middle East region – not to mention the Western world. Naturally, many of the international players will reassess the value of a US alliance under this government. Perhaps this will push Israel to become even more self-reliant. Prayers for citizens may be all that is left and we pray we are very wrong on that.

Bennett to Americans: We want stability, but not two states, by Lahav Harkov/Jerusalem Post, August 25, 2021