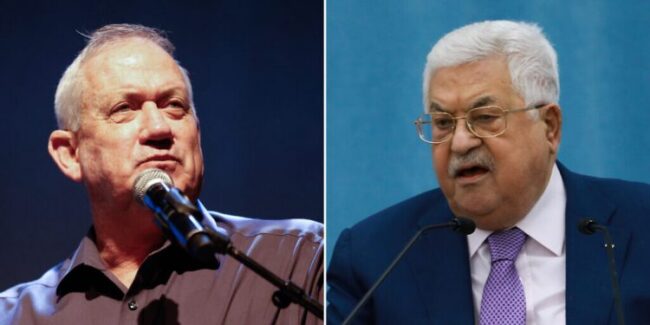 Israeli Defense Minister Benny Gantz has decided to take a number of steps to strengthen the Palestinian Authority following his meeting with PA chairman Mahmoud Abbas Sunday night. But, as far as we can see, he has asked nothing in return.

The government is slated to, among other things, lend the Palestinian Authority half a billion shekels ($155 million), which supposedly will be repaid from the June 2022 tax money Israel collects on behalf of the PA. This can only happen with the approval of Finance Minister, Avigdor Liberman. In addition, Israel will increase employment permits by 15,000 workers, add 1,000 workers in the tourism industry and proceed to issue building permits for Arabs in Area C. This government has agreed to maintain the status quo on Jewish building, yet it will issue permits to Arabs!

Israel will also begin determining the humanitarian status of thousands of Palestinian Arabs living without documentation in Judea and Samaria today, including people who came from the Gaza Strip years ago, and visitors who came from abroad and married at an older age.

Religious Zionist Party leader Bezalel Smotrich slammed Gantz for “meeting with a man who denies the Holocaust, who pays salaries to terrorists and is suing him and the State of Israel in The Hague.” Smotrich warned that “Israeli society does not understand the potential damage this event can inflict on the diplomatic level.” Showing such weakness can only be harmful to world opinion of Israel.

We are outraged by the moves this administration is making. Jews living in Judea and Samaria still live under Civil Administration which does little to protect their rights, while the application of Sovereignty hangs in the balance.