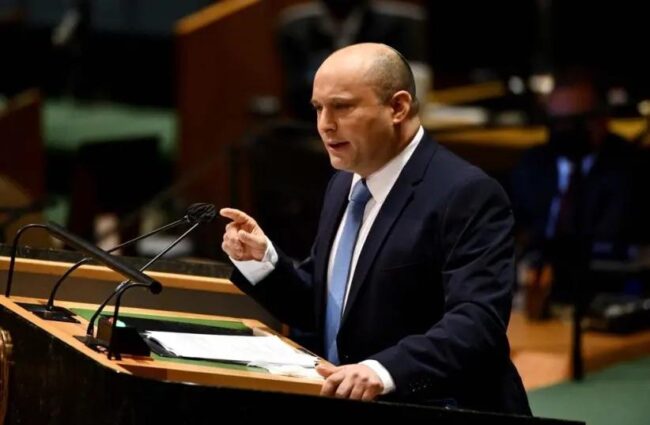 Naftali Bennett spoke at the UN General Assembly today at 9am (EDT) today to deliver his first international political speech since being sworn in as Prime Minister of Israel.

Bennett talked about the Israeli fight against the coronavirus and presented his government’s current policy – encouraging vaccines while having fewer restrictions and avoiding lockdowns. Bennett focused on messages about Israel’s independence in the face of the threats that surround it.

Part of the speech was devoted to the Iranian issue. Bennett demanded significant actions by the international community to prevent Iran from arming itself with nuclear weapons. Against the background of the US intention to return to the 2015 nuclear deal, Bennett message stated that the days of speeches are over and now the test of action has arrived.

Bennett did not respond to Palestinian Authority chairman Mahmoud Abbas’ speech at the UN last week and called on the PA to “engage in the welfare of their people and not obsess over Israel.” A source in the Prime Minister’s entourage said in a conversation with reporters that “the prime minister has a clear position on the Palestinian issue and on a Palestinian state. There is currently no possibility of political negotiations – we are dealing in the realms of possibility.”

Shortly before Bennett’s address to the UN General Assembly, Israel’s ambassador to the United States and United Nations, Gilad Erdan, spoke. He said that the US and other world powers are increasingly considering a “plan B” to stop Iran’s nuclear program, should talks fail. “The international community and Americans are starting to talk to us more about a plan B on Iran.” Erdan did not elaborate on what the alternative plan would entail. “In the past, the estimate was that there was an 80 percent chance it [Iran] would return to the [2015 nuclear] deal, today that has dropped to around 30%. If Iran doesn’t return [to the deal], this changes the whole picture for the world,” he added.

We applaud Prime Minister Bennett for standing up to world leaders in the well-known Halls of Israel Hatred at the UN. He remained strong against Iran’s commitment to obtain nuclear weapons. He also touched upon the recent anti-Semitic Durban Conference and thanked the 38 nations who chose to side with Israel by not attending. Bennett also emphasized the fact that can no longer be ignored: “…Israel is forging ties with Arab and Muslim countries. Ties that began 42 years ago with Israel’s historic peace agreement with Egypt, continued 27 years ago with Israel’s peace agreement with Jordan,
and even more recently with the Abraham Accords – a “warm” peace deal that normalized our relations with the United Arab Emirates, Bahrain and Morocco.”

We still question the stability of the new government that needed to pay the Islamist Ra’am Party 50 Billion shekels and agree to normalize many dunams of Arab settlements in the Negev (how can this be excused?) in order to form the slimmest coalition. But in speaking at the (almost empty) United Nations, Bennett seems to have hit many of the right notes.