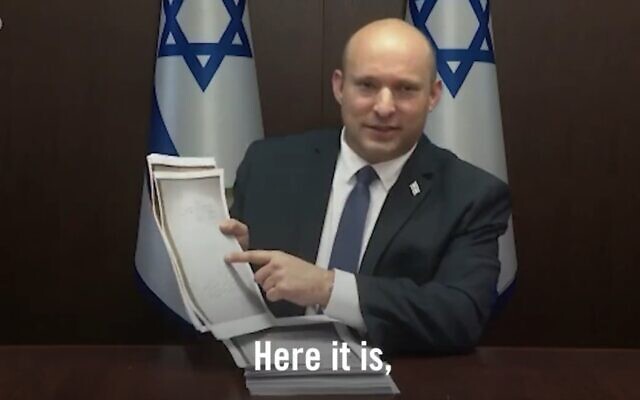 Prime Minister Naftali Bennett on Tuesday published documents he said were taken from Iran. The documents, procured in the daring 2018 raid, show Iranian intelligence spied on the UN’s atomic agency in order to better cover up its rogue nuclear activities.

Bennett tweeted a link to the Google Drive files, which are in Persian, along with a video in which he responded to remarks by Iranian Foreign Minister Hossein Amir-Abdollahian dismissing the spying allegations last week at the Davos Economic Forum as “Zionist lies.” (Prior to this, the files had been shown only to the US.) “Iran lied to the world, Iran is lying to the world again right now, and the world must make sure that Iran doesn’t get away scot-free,” Bennett warned.

As Iran continues to be exposed for its true intentions and continues to repeat its lies, the pressure on Israel continues to grow with urgency for her to be prepared against any attack by Iran.