Jewish visitors on the Temple Mount. Note the dearth of Muslims and nearly as many police as Jews in this group.
(Photo: Arutz Sheva)
Today is Rosh Chodesh Av – the first day of the month of Av on the Jewish calendar. It begins the Nine Days leading to Tisha B’Av, when we mourn the destruction of the Temples in Jerusalem, among other calamities that have befallen the Jewish nation throughout history.
As Jerusalem’s Temple Institute Co-founder Rabbi Chaim Richman said, “We are no longer in exile: Sixty-nine years ago we miraculously returned to our land and re-established Jewish sovereignty. Fifty years ago we were reunited with Jerusalem and the Temple Mount.”
“It’s time to wake-up and re-frame Tisha B’Av into a day of hope. We cannot continue to mourn robotically as if nothing has changed in the last century.”
In that spirit, the Temple Institute presents the following short video. 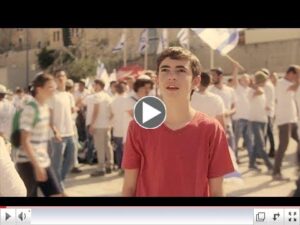 In response to the brutal murders in Halamish Friday night, Member of Knesset Bezalel Smotrich (Jewish Home), called for the construction of a synagogue on the Temple Mount.
MK: Build Synagogue on Temple Mount
MK Smotrich said, “The Zionist response would largely be to make the other side understand and feel that they have lost. They must understand that they gain nothing from terrorism. They are the only ones who will lose, and this will happen on three levels.”
These three levels include:
1. Build a synagogue on the Temple Mount
2. Exact a very steep price from the (Arab and Muslim) population in Judea and Samaria.
3. Build in Judea and Samaria.
Three steps we wholeheartedly agree with.