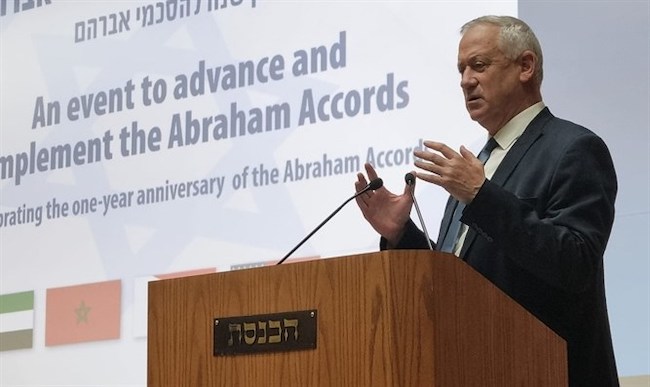 Defense Minister Benny Gantz addressed opposition leader Benjamin Netanyahu at an event marking the one-year anniversary of the Abraham Accords in the Knesset. Gantz reminded him that the agreements were signed after Netanyahu agreed to remove from the agenda his intention to apply Israeli Sovereignty in parts of Judea and Samaria.

“The fact that we prevented a unilateral move of annexation allowed the vision of the Abraham Accords to materialize and break through. I am very happy that these peace treaties were signed and I am sure they will be expanded and be an engine of change in the Middle East,” Gantz said.

He added that “in order for the State of Israel to reach peace agreements and expand them, it must remain the most powerful state in the Middle East. That is how we act and that is how we will continue to act forever.”

Sorry to say, it angers us that Gantz speaks so proudly that Sovereignty was taken off of the table during the Abraham Accord negotiations. Just a reminder – in order for Israel to “…remain the most powerful state in the Middle East” Sovereignty must be applied! Sovereignty guarantees Israel’s defense and safety along with its future as a Sovereign nation. Gantz seems to have forgotten that.