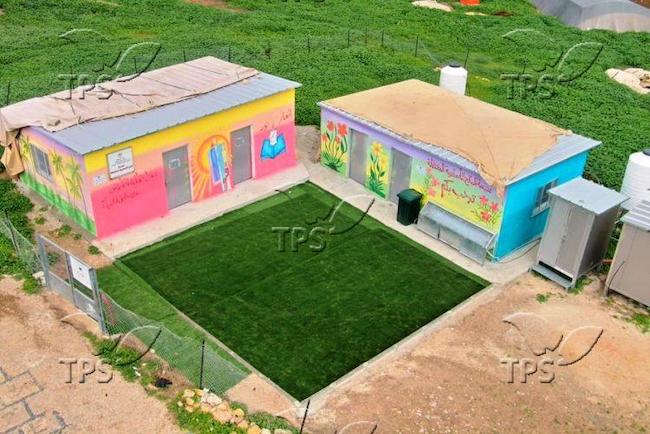 The Palestinian Authority (PA) has illegally built a new school on the site of the historic Hamam al Maliakh hot springs, located in the heart of the Jordan Valley’s Bazak Nature Reserve. The site is in Area C, which is under full Israeli jurisdiction.

Some years ago, an Arab family took over the site, turning the historic structure into a private residence and making structural changes, as if it were owned by them.

Now, a new school has been built at the site in recent weeks, including a sign announcing that the construction was funded by the European Union and a group of European countries. All have been playing an increasingly significant role in the PA’s quiet illegal takeover of Area C.

Regavim, which is at the forefront of combating the PA’s illegal construction, has turned to the Civil Administration for answers on their lack of action on the issue.

Eitan Melet, Regavim’s Field Coordinator for Judea and Samaria, explains: “The Palestinian Authority is playing hide and seek with the Civil Administration. The PA builds “confrontation schools” – illegal schools in Area C – for the purpose of anchoring a network of outposts in Area C. The Palestinians come up with new, inventive ways of camouflaging their activities, and the Civil Administration, either intentionally or unintentionally, continues to fall into the very effective trap that the PA is using over and over again: Once these illegal schools are completed, they create a win-win public relations headache which the Civil Administration hasn’t learned to contend with. The PA appears to be the only team on the playing field.”