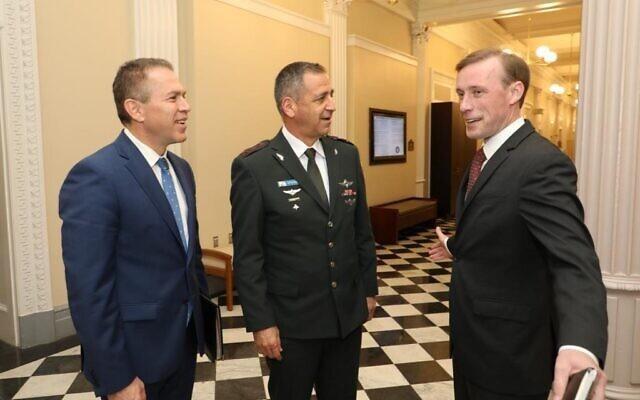 US National Security Adviser Jake Sullivan told IDF Chief of Staff Aviv Kohavi that US President Joe Biden has a “commitment to ensuring that Iran never gets a nuclear weapon,” according to the White House.

Sullivan and Kohavi met in Washington on Wednesday alongside Israeli Ambassador to the US and UN Gilad Erdan and discussed “the challenges to security and stability in the Middle East, including the threat posed by Iran’s malign activities in the region,” the White House said in a statement.

Sullivan “reaffirmed President Biden’s unwavering support for Israel’s security and commitment to continuing to strengthen the defense partnership between the two countries.”

Nevertheless, Kohavi railed against the United States plan to rejoin the 2015 Iran nuclear deal during the meeting with Sullivan and other top American defense officials, according to the IDF.

Kohavi reiterated the “failures of the current nuclear deal” and attempted to convince the American officials of alternative methods of preventing Iran from obtaining an atomic weapon, the military said.

Something smells rotten to us. Biden’s words, to those who don’t understand the full scope of the problem, probably sound reassuring. We know better and his “commitment” is nothing more than an empty promise, especially when his goal of getting back into the Iran deal is still on the table. The two just don’t go together.

Source:
After Kohavi meeting, US reaffirms commitment to not let Iran get nukes, by TOI Staff and Judah Ari Gross/Times of Israel, June 24, 2021