It was announced today that Iran conducted a ballistic missile test in violation of the UN resolution put in place after the Iran nuclear deal.
According to the Jerusalem Post:
The missile in question was the Khorramshahr medium-range ballistic missile, which the officials said flew 600 miles before exploding, in a failed test of a reentry vehicle.
The test was in direct violation of UN resolution 2231, which stated that Iran could not conduct such acts.
During his campaign, US President Donald Trump expressed his opposition to the nuclear deal reached last year between Iran and worlds powers.
Report: Iran Launches Ballistic Missile Test in Violation of UN Resolution
Additional reporting here:
After Iran tests ballistic missile, Netanyahu urges rethink of ‘failed’ nuke deal
Prime Minister Netanyahu stated in response to the missile test:
“Iran has launched a ballistic missile again. This is a flagrant violation of a UN Security Council resolution. At my upcoming meeting with President Trump in Washington, I intend to raise the renewal of sanctions against Iran in this context and in other contexts. Iranian aggression must not go unanswered.”
Netanyahu says Iran’s aggression must not go unanswered
In the meantime, Israel has announced that another layer in its tiered missile defense system is nearly operational:
David’s Sling nearing operational readiness
Israel is the only country in the world that has a nearly-operational multi-tiered missile defense system:
– The Arrow-3 system, which was just delivered to the Israeli Air Force, forms the uppermost layer.
– David’s Sling is nearing operational readiness. It is meant to intercept tactical ballistic missiles, medium- to long-range rockets, and cruise missiles fired at ranges of 40 km to 300 km.
– And of course, the Iron Dome system, which has proven itself against Gaza, is designed tointercept and destroy short-range rockets and artillery shells.
Once again, Israel leads the world in technological innovation, design and development. There are many theories as to why Israel’s are so creative – the fact that Israel has never known real peace and must stay ahead of its enemies; compulsive army service, the need to be solutions-oriented – whatever the reasons, the world is put on notice that Israel is a force to be reckoned with. This past Friday, the world commemorated International Holocaust Remembrance Day. We tell the world, the days of the passive Jew incapable of self-defense are long gone.
Jenny Tonge, Israel Hater
It’s a beautiful thing when someone who is anti-Israel gets battered in an interview. This is what happened with British “Baroness” Jenny Tonge, interviewed on the Jewish current affairs channel, J-TV.
Realizing how poorly she responded to the interviewer’s questions, she is now claiming that she was “interrogated”, and was “caught in a trap… by a very nasty character who was determined to blacken my name and stop me saying anything meaningful.”
Actually, her reasons for crying foul are furthest from the truth, as the interviewer was exceedingly polite and gave her ample opportunity to respond to his questions. How true of all anti-Israel, anti-Semitic rubbish: deflect and re-frame the story when caught telling lies and exaggerations.
Read it here: Baroness claims she was ‘caught in a trap’ in interview on Israel
View the video here: 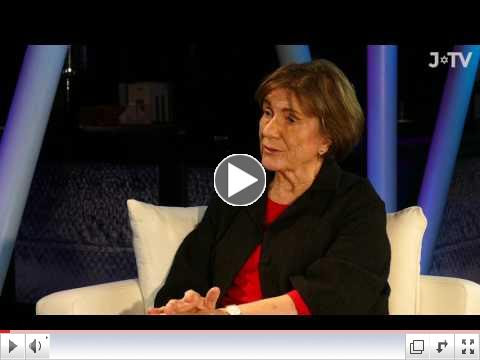