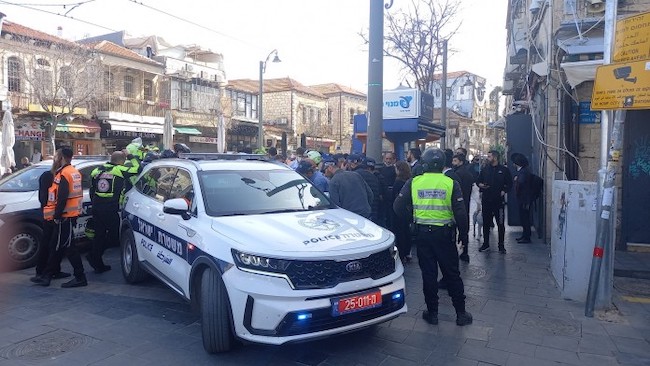 “We are currently dealing with a new wave of terrorism,” said Prime Minister Naftali Bennett in a statement issued in response to the horrific attack in Bnei Brak.

Within the last week, Israel has experienced one of the worst waves of terror attacks in quite some time. In the last 7 days 11 have been murdered (Jews, Druze and an Arab Christian). This illustrates a disturbing trend of terror carried out in cities with mixed residents as well as communities populated only by Jews.

MK Itamar Ben Gvir delivered a fierce message: “The enemy recognizes weakness. This wave of terrorism is reminiscent of the bloody days of Oslo, and the writing on the wall is inscribed in the name of Internal Security Minister Omer Barlev and Police Commissioner Kobi Shabtai, the most failed people in charge in the history of the State of Israel.”

Yesterday, two suspected terrorists were arrested at Jerusalem’s Shuk Machane Yehuda after civilians in the area identified them to police. The police approached the suspects, asked them for ID, and were brutally attacked by the suspects.

Just this morning a 28 year old Israeli man was seriously wounded in a terror stabbing near Neve Daniel. He received lifesaving surgery and is out of danger. Three others were treated at the scene for anxiety. The terrorist was shot dead on the bus by an armed passenger. We hope this hero will not receive the rude and dismissive treatment by investigators the way last week’s hero in Beersheva did.

After a situational assessment among top security officials and Defense Minister Benny Gantz, the Defense Ministry issued a list of immediate steps to be taken in response to the wave of terrorist violence.

Prime Minister Bennett thinks he knows exactly what needs to be done – but will he do it? It should be very clear to him now that he must 1) put any and all political pressures aside to stop appeasement of Arabs and 2) fully enable all of Israel’s security and defense forces to dig deep to eradicate this new wave of terror and stop it dead in its tracks.

As for the United States…thank you for your swift condolences. However, if we really want to be a friend to Israel we need to wake up and stop your delirious position on a two-state solution, which would only add to the terror as it would surely be ruled by Hamas, an Iranian proxy. We must also with an immediate cancellation to the Iran nuclear “deal” and cessation of sanctions.

AFSI is deeply saddened by these recent heinous attacks and mourns the loss of all of the victims. We also pray for the speedy recovery of those who are injured, along with a return to normalcy for all residents.

Bennett: We are dealing with a new wave of terrorism, by Prime Minister Naftali Bennett/Israel National News, March 30, 2022