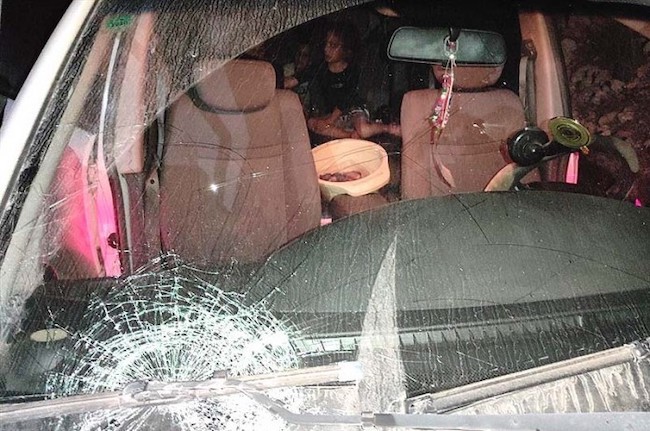 A family from Gush Shilo was caught several days ago in a planned ambush set by local Arabs, who blocked their vehicle with a barricade made of stones and attacked the family’s car with rocks.

Miraculously, the couple and their children were not harmed, but Uri, the father, was forced to shoot a bullet in the air to drive the terrorists away.

The parents and four of their children, ages nine, five, three, and one-and-a-half were in their car at the time of the attempted attack. The rocks shattered their windshield (See photo) and the car was hit by about ten more rocks that inflicted heavy damage.

“‘What? Investigation? Of what?’ We ask. The policeman replies: ‘You will hear about it in the interrogation. It’s about your using your weapon.‘”

Attorney Nati Rom from the Honenu legal aid society showed up at the police station to assist the family. Following his interrogation, Uri was released unconditionally.

While AFSI is grateful that Honenu provided swift and successful legal assistance for Uri, it is an outrage that it was needed in the first place. No Jew should be criminalized for exercising self-defense against Arab aggression.