Throughout his career, Senator Marco Rubio has been a consistent and good friend of Israel. He gets it. Most recently, during the latest confirmation hearings for David Friedman as U.S. Ambassador to Israel, and in the midst of the anti-Trump frenzy, Marco Rubio spoke eloquently, passionately, and accurately, about Israel. Here is a summary of what he said:

– A major impediment to a reconciliation between Israel and the “Palestinians” is the inability of “Palestinian” leadership to recognize Israel as a Jewish state.

– Israel is most loyal and important ally in the region; a solution cannot be imposed.

– Incitement to violence by PA leadership is a bigger impediment to a settlement between Israel & the “Palestinians” than are the so-called Israeli “settlements”.

– It is unlikely, at least in the immediate future for any solution due to Palestinian

intransigence and the circumstances in the world and the region in which Israel lives.

– He even ridiculed the need for David Friedman to defend remarks he made in the past about left-wing Jews and Obama and his administration, and had the “chutzpah” to criticize the leftist anti-Israel organization JStreet.

Read more about it HERE, and watch it via the video below: 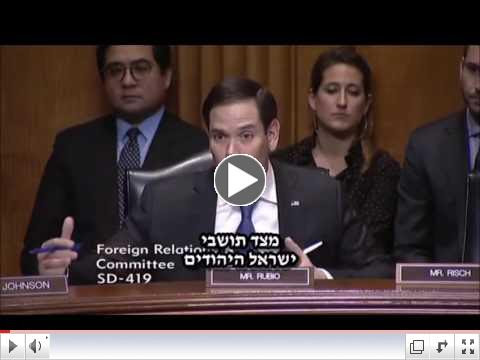 Please contact Senator Rubio HERE, and thank him for his strong and consistent support for Israel.

The current state of affairs in Israel, especially viewed from the spectrum of U.S./Israel relations under the Trump administration, will be reviewed in an open Q&A.

Hosted by Stephanie Dishal at her home in Prescott.

AFSI’s Scottsdale Chapter, under the leadership of Dr. Matthew Karlovsky, has arranged a meeting at the JCC.

The event will provide a spirited discussion about AFSI’s positions through the years on issues affecting Israel and the U.S.

A video of a recent AFSI Chizuk mission will be shown. Everyone is invited.