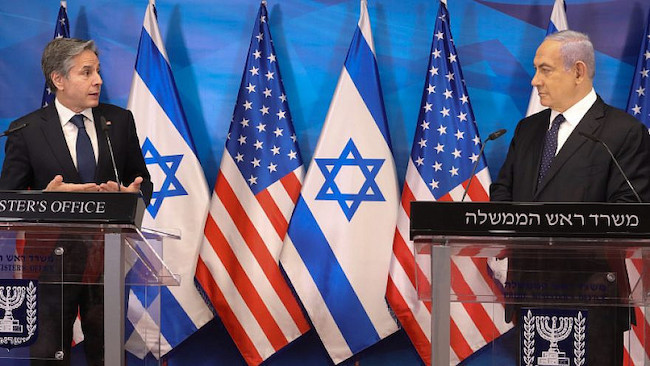 US Secretary of State Antony Blinken arrived in Israel on Tuesday for meetings with the country’s leadership. The declared mission of the meeting was to “support their efforts to solidify a ceasefire” following the end of Operation Guardian of the Walls.

This is Blinken’s first visit to the Jewish state since taking office as the US’ top diplomat.
He met with Prime Minister Benjamin Netanyahu in Jerusalem.

Netanyahu warned Blinken that Israel “will give meaning to our commitment to our self-defense if Hamas breaks the calm and attacks Israel. Our response will be very powerful.” On Iran, he expressed hope that the US “will not go back to the old JCPOA, because we believe that deal paves the way for Iran to have an arsenal of nuclear weapons with international legitimacy. Whatever happens, Israel will always reserve the right to defend itself against a regime committed to our destruction, committed to getting the weapons of mass destruction for that end.”

Additionally, Netanyahu said that “there could be a situation in which our paramount goal – ensuring that the ayatollahs do not put a stop to the existence of the Jewish people, which has continued for thousands of years – will require us to make courageous and independent decisions. The State of Israel will not allow Iran to arm itself with nuclear weapons.”

“In any case, with or without an agreement [between the US and Iran], we will do everything to prevent Iran from arming itself with nuclear weapons and this is because it concerns our existence,” he underscored.

Israel and the US have common goals of peace, security, and prosperity. We know Israel’s plan is based on Sovereignty and security of the country. However, the way in which the US intends to accomplish these goals is dangerous for all concerned. We are secure knowing that Netanyahu holds firm to his commitment that Iran never obtains nuclear weapons. Unfortunately, we know the US is delirious to get Iran back into the “deal.”

Blinken underscored that “Biden made crystal clear throughout the violence that the US fully supports Israel’s right to defend itself against attacks such as Hamas firing rockets indiscriminately against civilians.” That’s a very nice statement, but the root of the problem is that Iran must cease funding Hamas. We wanted to hear Blinken condemn all of this. Why didn’t he?

We know the current US administration fully understands that Iran is the problem. They’ll never admit it though. What exactly buddying up to Iran – the #1 state sponsor of terror – holds for US politicians may seem like a mystery to some. The moment of clarity is when you understand that using anti-Semitism for their selfish agendas and power grabs are the reason. All of this is deeply alarming especially in light of the chilling rise of anti-Semitism in the US – most recently the attacks on the streets of US cities. With the in-your-face and unapologetic displays of a growing anti-Semitic US Congress, and the weak Biden “leadership” and his puppeteers, we remain concerned for the safety of Israel and the Jewish people.

Source:
Netanyahu and US Sec. Blinken Discuss Ceasefire, How to Prevent Hamas’ Rearmament, by Aryeh Savir/TPS, May 25, 2021