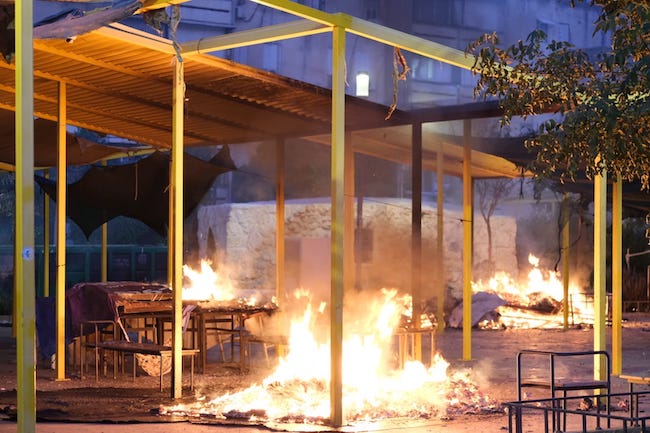 NOT JUST ANOTHER TERROR ATTACK: ISRAEL IS AT WAR NOW!

Since our Monday newsletter earlier this week, Israel has experienced a relentless, non-stop barrage of terror attacks, incidents and disturbances that rapidly erupted, along with injuries – and unfortunately – loss of life.

What has transpired in Israel over the last few days is not terrorism – not just another bomb thrown, several rockets fired at Israel, or a stabbing attempt. The mainstream media outlets want you to believe that this is a “conflict” between Israelis and Palestinians or just Israel and Hamas “trading rockets.” And the Arab mobs inciting violence against Jews in Lod? The media calls it “civil war”, but truth says it’s a pogrom. What’s going on is an open WAR with the Arab goal of eliminating Israel. The TRUTH: this is now a show of force by Israel exercising her Sovereign and legal right to defend itself.

Americans For A Safe Israel mourns all those in Israel who have needlessly lost their lives during this reign of terror. We wish a Refuah Shlema to all those who have been injured and strength and comfort for the families and friends. We pray for the safety of millions of Israelis still at risk from rocket attacks who are forced to remain hiding in bomb shelters. We pray for the Israel Defense Forces and all of the Jewish Nation State’s security agencies that are working vigorously to protect and defend Israel.

The IDF continues to hurl significant blows to the Hamas terrorist organization in the Gaza Strip via five types of targets:
1. High-rise buildings belonging to the terrorist organizations in one way or another.
2. Hamas underground assets.
3. Elimination of senior officials.
4. Launch pits – the broad attack on the launch pits that started Tuesday night, was concluded Wednesday morning.
5. Activist homes – demolishing the homes belonging to terrorists who have gone underground, so that they come out of hiding homeless.

To date, the IDF has attacked more than 600 terrorist targets and destroyed most of the production line of Hamas and Islamic Jihad. The IDF and the Israel Security Agency (ISA) carried out a series of targeted killings of senior members of Hamas’ General Staff in Gaza City and Khan Yunis on Wednesday. Today, they destroyed Hamas’ internal security headquarters located in a 14-story building, as well as Hamas’ central bank.

We hear that Hamas was surprised by the intensity of the attacks from Israel this time around. Israel’s usual position of restraint seems to have taken a back seat. Israel has refused a ceasefire. The IDF has unleashed a show of full force to defend Israel’s Sovereignty and protect its people.

Just today, the IDF has called up 9,000 reservists and leaves of active combat units have been suspended. The IDF chief has requested an additional 2,000 reserves.

The situation is not slowing down and is getting worse. AFSI is not sure what is on the horizon, but we do know that Israel is facing very difficult days ahead The Israeli people are anxious, traumatized, and exhausted from several straight nights of running to and remaining for an unknown period of time in bomb shelters for their safety. They are fearful for the mental well-being of their children. “The children” means not just little kids terrified at the sound of sirens and being displaced underground from the security they know as home. It also means Israel’s other “children” – those who serve in Israel’s armed forces for the sole purpose of keeping Israel SAFE.

Americans For A Safe Israel stands with Israel and prays for a speedy end and lasting resolution to this vicious effort to wipe out the Jewish Nation State. We believe that it is time to pull out the stops and fight back with everything she has. As always we pray for peace and better days ahead for all of Am Yisrael.

Let’s stand strong together with Israel and pray for her with all our heart and soul.

The photo above shows fires set by Arabs in Lod and is courtesy of Tazpit Press Service/TPS. TPS has published a photo timeline of the violence – Click HERE.