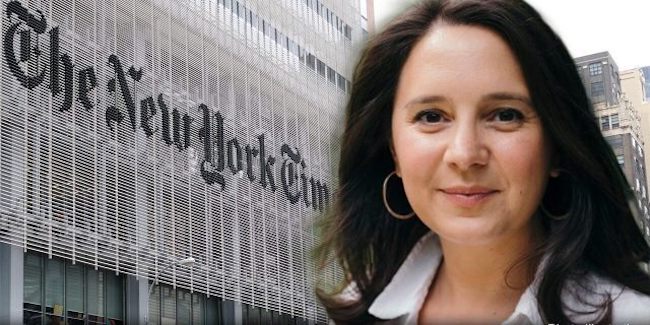 Americans For A Safe Israel applauds former opinion editor and writer Bari Weiss’ resignation from The New York Times earlier this week. AFSI commends Weiss for her forthright resignation letter posted on her personal website. This action exposed what we all know to be true about her former employer: The New York Times is intentionally and knowingly biased against the Jews and Israel.

Excerpts from Weiss’s letter:
They have called me a Nazi and a racist.
I have learned to brush off comments about how I’m “writing about the Jews again.”
Stories are chosen and told in a way to satisfy the narrowest of audiences, rather than to allow a curious public to read about the world and then draw their own conclusions.

This letter has sent wide-reaching shock waves. Her exposure of The New York Times now serves as a wake-up call to all anti-Israel, anti-Jewish media disguised as fair and un-biased professionals.

A gut-rehab job across the media spectrum to expose the rot from inside that intentionally disseminates anti-Semitic, anti-Israel rhetoric has been sorely needed. We are not interested in having another “narrative” or a conversation about this either. The facts about anti-Semitism in the media speak for themselves. We demand ACTION be taken to hold accountable those who call themselves “journalists” at the expense of delegitimizing Israel and the Jewish people. ACTION also means a return to fact based, non-biased reporting.

While the truth about The New York Times was exposed this week by an insider, the decline in professional standards with this paper is nothing new. The New York Times has a long and troubled record of anti-Jewish reporting that goes back to its founding. Buried By The Times: The Holocaust and America’s Most Important Newspaper (1996, by Laurel Leff) is an excellent book on this subject. News about the ongoing and increasing atrocities against the Jewish people before and during the Holocaust was literally buried in the back pages of the paper. This was due the paper’s Jewish publisher Arthur Hays Sulzberger’s negative views about Judaism. Sulzberger also held virulently anti-Zionist views and was not in favor of the establishment of a Jewish state.

Since then, nothing has changed and The New York Times continues its biased reporting against Israel and the Jews. Arthur Gregg Sulzberger (AG), to whom Ms. Weiss’ letter was addressed, is the grandson of the above-mentioned Arthur Hays Sulzberger. AG took over the reins as publisher from his father, Arthur Ochs Sulzberger, Jr. in 2017. The tradition of the JINO family continues, for now.

AFSI was an organizer of a protest in April 2019 calling out The New York Times for having published an anti-Semitic cartoon, which depicted Israeli Prime Minister Benjamin Netanyahu as a dog on a leash led by a blind President Donald Trump. “Shame on the Times!” was heard loud and clear in front of The New York Times headquarters by many participating Jewish organizations and hundreds of pro-Israel activists. Together, we called out the “paper of record.” We know they heard us because less than two weeks after the protest they issued an apology.

AFSI congratulates Bari Weiss for not remaining silent and for the ACTION she took to expose anti-Semitism at The New York Times. Her letter spoke with a clarity, integrity, courage and truth that gives us hope for the future.