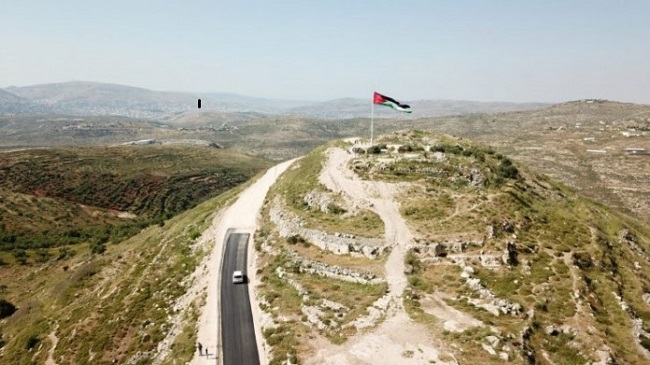 The Palestinian Authority (PA) held an official ceremony over the weekend to inaugurate a “Palestinian” tourist complex in the town of Sebastia in Samaria, the historic capital of the biblical Kingdom of Israel.

In total non-compliance with an order issued by the IDF approximately two months ago, a 15-meter-high mast was installed at the site, topped by a PLO flag.

The Samaria Regional Council has been working for several months with Shomrim Al Hanetzach, (Guardians of Eternity), a project dedicated to the preservation of the archaeological treasures situated throughout Judea and Samaria, and with the Ministry of Defense and government officials to combat the phenomenon of the PA taking over Jewish historical sites.

Head of the Shomron Regional Council Yossi Dagan wrote in a scathing letter to Prime Minister Benjamin Netanyahu and other officials, “For a long time now, Abu Mazen [PA head Mahmoud Abbas] and his terrorist comrades have been developing and preparing land at the entrance to ancient Samaria, the site of the historic palace of the Kings of Israel, with significant damage to archeological remains and vandalism,”

Dagan underscored the fact that Israel has the authority and duty to act to prevent the destruction of the site, even though part of the sits is in Area B, under the PA’s control. He stated that the PA’s authority in Area B was “given only to manage civil and municipal matters, and not to damage the property and destroy national and world heritage assets.”

AFSI echoes Dagan’s comments. There is a big difference between managing Area B and destroying it. We believe that Israel has the right and must exercise its legal authority to safeguard Area B from all illegal activity.