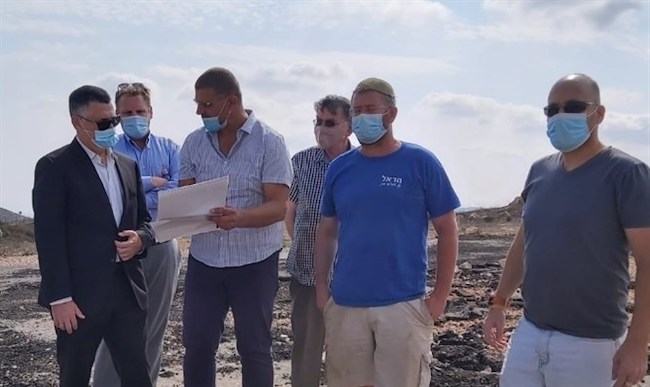 MK Gideon Sa’ar of the Likud party visited the communities of Amichai and Shilo, in the Binyamin region, on Sunday. The focus of his visit was on ongoing attempts by the Palestinian Authority to seize control over open areas near Israeli communities.

Following his tour, Sa’ar told his hosts, “I was very impressed by what I saw today in Amichai, but especially by the pioneering spirit that you are exhibiting here, after many years during which no new settlements were established in Judea or Samaria. This is the way in which we need to pursue and expand settlement.” He added that, “The Palestinian Authority is engaged in an ongoing battle to seize land. This is a very aggressive battle, funded by the European Union, well planned and organized, and the State of Israel needs to respond to this.”

We at AFSI are extremely proud of our friends in Amichai, most of whom were expelled from Amona under the harshest circumstances. They have made Amichai into a thriving and enjoyable place to live. They deserve the most positive assistance possible in order to maintain the safety and security of the new community and its residents.

The heads of the “Forum for Zion and Jerusalem” within the Likud party, Avichai Boaron and Doron Nir Tzvi, also spoke following the tour, echoing Sa’ar’s remarks, “…the Arabs are gaining control over hill after hill – and they don’t care if it’s in Area B or C. And Israel isn’t doing a thing in response.”

Source:
‘The Palestinian Authority is seizing hill after hill while Israel does nothing’, by Hezki Baruch. Arutz Sheva, November 1, 2020