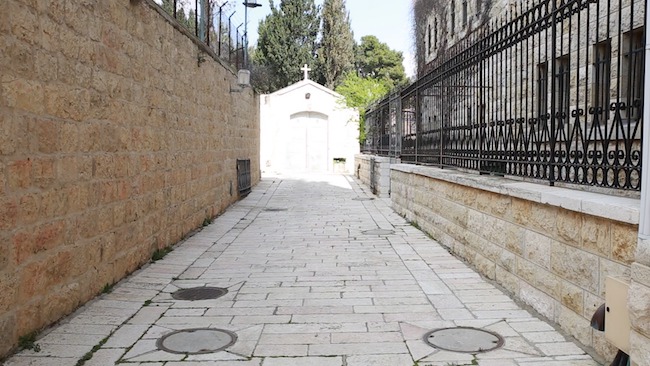 The Regavim Movement filed a petition Tuesday) in the Jerusalem District Court, against the Jerusalem Municipality, which has been concealing the existence of an underground tunnel dug by the Church of the Dormition, one of the largest and most recognizable Catholic churches in Jerusalem. The Dormition, located just outside the Zion Gate, on the highest point in ancient Jerusalem, is included in the historic preservation compound known as “The Sovev Homot [Jerusalem Ramparts] National Park.”

As a result of Regavim’s legal pressure over the past two years, the Jerusalem Municipality was forced to measure and document the tunnel, which encroaches on public property in an area dense with archaeological remains. Since the completion of the mapping project, the municipality has ignored Regavim’s continued requests for documentation of the tunnel and law enforcement at the site.

Mount Zion, one of the gateways to the Old City of Jerusalem, is well known for its unparalleled historic and archaeological importance to the three monotheistic faiths. The section of the mountain that is protected by the “Sovev Homot (Ancient Jerusalem Ramparts) National Park” contains numerous archaeological sites, including the site identified as King David’s tomb, the Hasmonean-era city walls, and the First Temple-era city wall.

For years, the existence of the tunnel was nothing more than a rumor shared among local residents and Jewish institutions active on Mount Zion, until Regavim sent an official request to the Jerusalem Municipality in 2019 for confirmation of its existence and precise details of the tunnel’s location, in order to determine the extent to which it encroaches on public land as well as the extent to which priceless antiquities may have been harmed by the unsupervised digging.

“When the details began to come into focus, we demanded over and over that the Jerusalem Municipality publicize the documentation of its findings, as required by the Freedom of Information Law. We further demanded that oversight, inspection and law enforcement procedures be taken immediately, to restore the site to its previous condition either by sealing off or demolishing the tunnel,” said Attorneys Avi Segal and Yael Cinnamon of the Regavim Movement. “We filed this petition only when our repeated requests to the Jerusalem Municipality were not answered.”