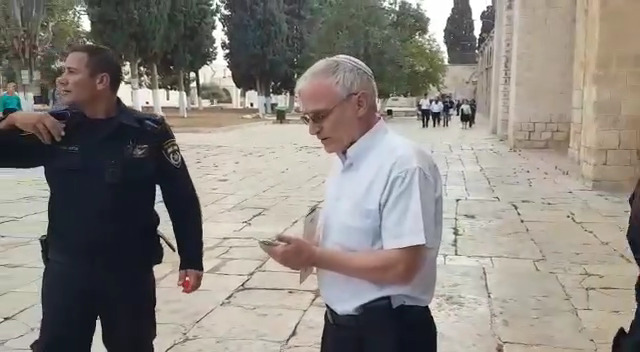 Attorney Aviad Visoli, who has represented Israeli groups dedicated to opening up the Temple Mount to Jews without any limits, stated on Tuesday, “Today we were privileged to pray Mincha with a minyan on the Temple Mount. A full prayer with a minyan and with a shliach tzibur (the leader of the prayer service) and the Hazarat Ha’Shatz (group prayer that follows the segment of individual prayer).”

Visoli, who did not offer details regarding where on the Temple Mount, and with whose participation the minyan prayer was carried out, registered that “in all the decades I have been ascending to the Temple Mount I did not have the privilege of saying a prayer in the minyan openly.” But this time, he reported, “the policemen looked at us and knowingly allowed the fullest prayer. Including a blessing for the sick.”

“This is the most significant progress in the rights of the Jews on the Temple Mount since the destruction of the Second Temple,” an exuberant Visoli proclaimed. “It is not possible to retreat from this point. The Temple Mount is in our hands!” Visoli declared.

AFSI is grateful to the Israeli policeman who allowed the prayer to take place and applauds Aviad Visoli and the organizations he represents for their dedicated work towards regaining Jewish access and prayer on the Temple Mount.