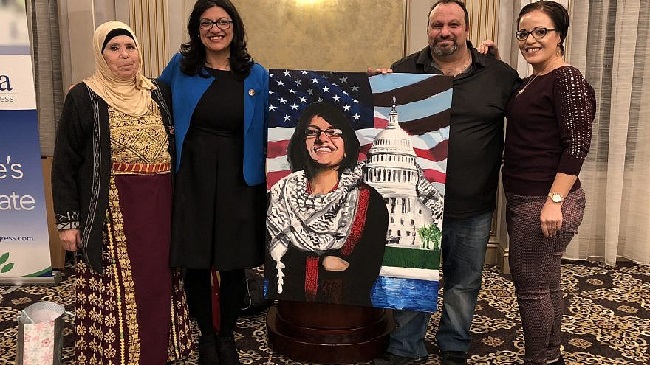 For the last two weeks we have reported on the anti-Israel/anti-Jewish activity of freshman Congresswoman Rashida Tlaib. AFSI is keeping a close watch on the disturbing rhetoric coming from this American politician.

We are pleased to see Tlaib is starting to be challenged as reported by Jewish News Syndicate (JNS). The first is Rep. Brian Babin (R-TX) calling on Speaker Nancy Pelosi not to approve a proposed congressional delegation to Judea and Samaria led by Tlaib.

Babin stated in a letter to Pelosi, “I am writing to express my extreme concern. This action, from an outspoken supporter of the ‘BDS’ Israel boycott movement … is both ill-conceived and inconsistent with our national values.”

Anti-Defamation League CEO Jonathan Greenblatt posted in a Twitter thread: “Days ago, @RashidaTlaib was photographed at an event with Abbas Hamideh, a man who has praised terrorist groups Hamas & Hezbollah and equated Zionists with Nazis. We ask her to clarify his attendance and denounce his anti-Semitism.”

On the same subject, newly elected Somali American Congresswoman Ilhan Omar is a BDS supporter and virulent anti-Semite. She now sits on the House Foreign Affairs Committee, the group that determines funding to foreign countries. This appointment could have and should have been nixed by Nancy Pelosi. A complete lack of bias and hatred should be a pre-requisite for an appointment to such an important committee. Shame on Pelosi for undermining our national values.

“Open Jew and Israel-haters Are Now in the US Congress” by Alan Bergstein who speaks out in his Arutz Sheva OpEd.

AFSI’s mission of educating the public about the REAL ISRAEL includes exposing both Tlaib and Omar. We are grateful organizations and individuals have begun to step up to the plate to denounce these open and unabashed Jew haters. Now words must be met with action.

Both politicians are a serious threat to the national values of the United States and a complete threat to Israel and the Jewish people.