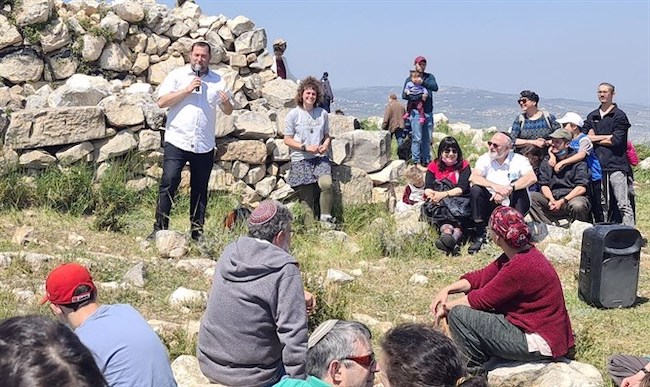 Thousands of Jews visited Mount Ebal in Samaria today and also visited the altar of Joshua son of Nun, part of which was destroyed last month by the Palestinian Authority. The site is believed to be the place where the Biblical Prophet Joshua built an altar after entering the Land of Israel more than 3,000 years ago.

Last month, a gravel crusher used by the Palestinian Authority for the paving of a new road deliberately removed and crushed stones from the ancient wall around the altar, provoking outrage among the Jewish and archaeological communities. The Samaria Regional Council promoted the restoration of the site and today for the first time held a huge event featuring thousands of people took place at the archaeological site.

Referring to the thousands who came to the first festival on Mount Ebal and the altar of Joshua, Dagan says: “They are destroying and we are building, they are trying to erase history and we are restoring and preserving the world history and historical sites of the Jewish people, the thousands who come today prove that the Jewish people do not forget their roots. A nation that remembers its past will have a glorious future on all its land.”