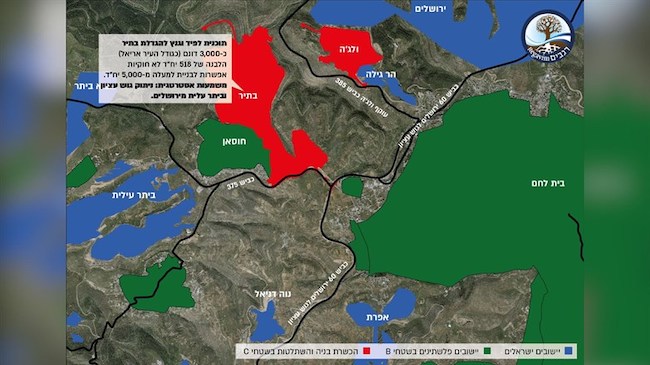 As part of a package of “good will gestures” Israel planned to make to the Palestinian Authority in advance of Biden’s visit, the Israeli government announced that it will approve six masterplans for Palestinian Arab settlements in Area C of Judea and Samaria. These plans will cut off Jewish communities says the Regavim movement.

The package will include approval of hundreds of existing illegal structures, alongside territorial expansion of Arab settlements consisting of thousands of dunams. One plan will effectively cut off Gush Etzion from Jerusalem and severely compromise the security of the Gush Etzion-Jerusalem Tunnel Road. Approval of Municipal Masterplans (Tab”a) are also planned in Binyamin and Shomron, including a plan that jeopardizes the very heart of Samaria, near Highway 5 between Ariel and Revava.

Meir Deutsch, Director General of Regavim lashed out, “Saar, Shaked, Kahana, Elkin, Hendel, Orbach – you were elected on right-wing votes because you promised to protect the Jewish settlement enterprise. It is your responsibility to block this insane plan to whitewash thousands of illegal structures that will cut off Jewish settlement blocs from Jerusalem and give permanence to the criminal Palestinian takeover of Area C.” These moves are especially damaging since the Knesset does not need to approve these giveaways as they are not in “sovereign” Israel.

No “gestures” of this nature should ever be made, especially while Yair Lapid is interim prime minister, and no functioning government can be counted on. We pray these plans will be discarded immediately.