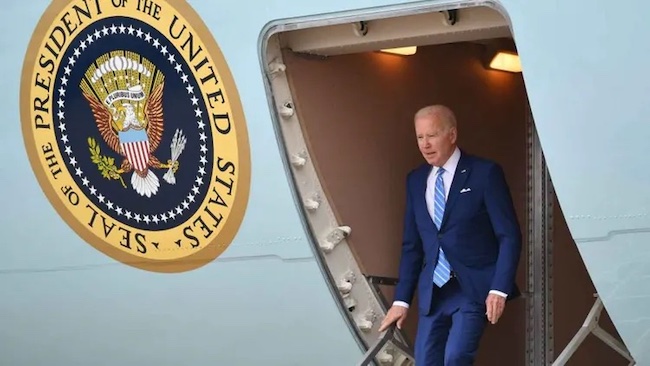 Was Biden’s trip to Israel this week destined to be a failure before it even began? Daniel Greenfield thinks so. in his article this week he sums it up this way: “A failed president will meet with failed Israeli leftists and failed terrorists.”

The timing of Biden’s trip was questionable and with no direction given that Israel’s government is barely functioning and in transition. Since Biden’s own leadership is failing miserably in the polls at home, his catering to the PA will not boost his image with them and of course, not with the citizens of Israel. Maybe he received a few seconds of praise from the enemies of Israel but that’s only a fleeting ego boost for a failed politician.

In a Channel 12 interview when asked about the “Squad” in Congress, Biden said, “I think they’re wrong. I think they’re making a mistake.” (This admission may come in response to Rep. Alexandria Ocasio-Cortez’s failure to commit to backing him in a 2024 run.) We can’t recall when Biden has spoken in the US calling them out or taken any action to stop their vile and anti-Israel rhetoric. Just yesterday, Andrew Kerr wrote in the Washington Examiner that “Squad” members, Reps. Ilhan Omar and Rashida Tlaib, are two of at least eight Democrats tied to a group with alleged links to the 1996 Hamas slaying of American teenager David Boim. On July 13, he posted to Twitter after his visit to Yad Vashem and meeting with two Holocaust Survivors, “I vow to continue our shared, unending work to fight the poison of antisemitism wherever we find it in the world.” Nice words but he fails to back them up with action.

Today, Biden and Prime Minister Yair Lapid adopted the historic Joint Declaration on the U.S.-Israel Strategic Partnership, known as the Jerusalem Declaration. It will “reaffirm the unbreakable bonds between our two countries and the enduring commitment of the United States to Israel’s security.” The countries “further reaffirm that the strategic U.S.-Israel partnership is based on a bedrock of shared values, shared interests, and true friendship.” It also states Biden’s ongoing push for the destined to fail two-state solution

Without action, this declaration is set for failure. Biden continues to defend his fantasy goal of reviving the Iran nuclear deal as if it will be his crowning achievement. While Biden agrees with Israel that Iran should never obtain nuclear weapons, he continues his push to resume negotiations with the #1 state sponsor of terror. (We can believe that he’s forgotten that even the IAEA has declared Iran an unreliable peace partner.) Iran has been enriching their nuclear capability despite expecting to do otherwise and no signed agreement will stop them. While Biden states the US continues a strong friendship with Israel along with a commitment to her security, he has never acknowledged the truth about the PA’s and Iran’s goal to wipe Israel off the map. Not acknowledging that truth won’t bring about anything positive for Israel or the PA – or for his legacy – if there will even be anything there to be had.

The truths are: Israel has a legal right to exist without interference; Israel has legal rights to her land; Israel is a sovereign nation and should not be expected to yield to international political pressure. Biden’s words of support and friendship for Israel are just empty gestures. They are not filled with a realistic plan of action nor a projection of strength. Without facing the truth about Israel he is destined to fail every time.

Biden’s Israel Trip is a Failure Before He Even Arrives, by Daniel Greenfield/ FrontPage Mag, July 13, 2022

Reps. Omar and Tlaib among Democrats tied to group with alleged links to Hamas slaying, by Andrew Kerr/Washington Examiner, July 13, 2022