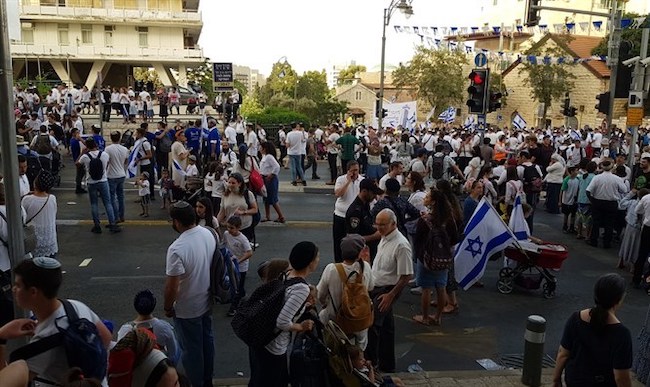 As the people of Israel gathered for Yom Yerushalayim festivities, the Jewish Nation State was quickly forced to turn to self defense. Violence perpetrated by Arabs and a barrage of rocket attacks from the start of the weekend to today have changed the tone of this significant and joyous holiday.

These are just some of the headlines coming out of Israel in the last 24 hours.

Jew nearly lynched outside of Old City after Arabs pelted a car with rocks and he loses control.

Public bomb shelters being opened in the south of Israel.

Clashes on the Temple Mount and in the Al-Aqsa Mosque compound.

Jerusalem on brink of eruption: More clashes in and around Al Aqsa mosque on Monday morning.

Hamas military wing issues ultimatum: Israel must withdraw police forces from Al-Aqsa and Sheikh Jarrah by 6 pm today. Israeli army orders all combat units to get ready and prepare for escalation, according to an Israeli state broadcaster.

It is obvious the Biden administration has opened the flood gates and green lighted violence by Palestinian terrorists, supported by Iran, against The Jewish State. There is a reason this scenario did not happen under the Trump presidency. It simply was not allowed. Biden is allowing it, even encouraging it.

The anti-Israeli forces sense an opportunity under Biden to finally destroy The Jewish State once and for all. This has coincided with the effort to destroy the security-focused government of Benjamin Netanyahu, very similar to what happened to Donald Trump.

Expect extreme violence in the near future in the Levant and the rest of the Middle East as Iranian militia forces are unleashed.

The developments coming out of Israel on this matter have been rapidly evolving and this is the latest as of this writing.

Hamas fires 7 rockets at Jerusalem, Beit Shemesh after Temple Mount clashes, by Michael Bachner and TOI Staff/Times of Israel, May 10, 2021