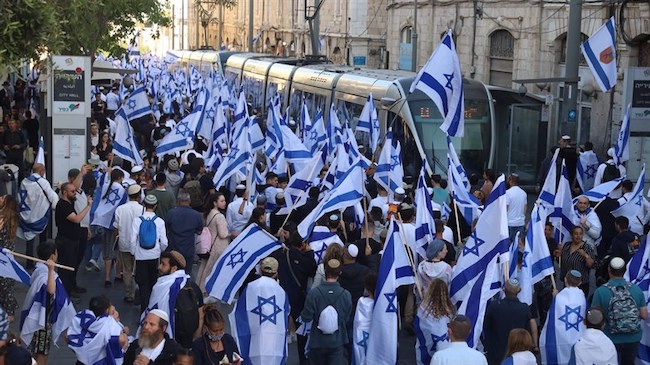 400 youths and adults holding Israeli flags started the march from Safra Square in central Jerusalem toward the Damascus Gate of the Old City.

Police refused to authorize the planned route of the march, citing security considerations and positioned squad cars and trucks at Tzahal Square, between Safra Square and the Old City, to prevent marchers from progressing. Despite efforts by the marchers to circumvent the blocks, they met with no success.

Yesterday, Prime Naftali Bennett Minister decided to bar MK Itamar Ben Gvir from the site: “We will not permit MK Itamar Ben Gvir to approach Damascus Gate, and from a legal perspective, we are entitled to prevent him from going there,” the police commander said, contradicting Ben Gvir’s insistence that his parliamentary immunity accords him the right to go wherever he pleases.

On Tuesday Bennett decided to close the Temple Mount to Jews – the Jewish people’s holiest site – until Ramadan concludes. Conveniently, the closure also coincides with the first demand by Mansour Abbas and his Islamic Ra’am party as a condition for their return to Bennett’s coalition. That demand is the end to all Jewish prayer on the Temple Mount.

Even though it has been the norm over the last few years to close the Temple Mount to Jews during the last days of Ramadan, it’s been done to pacify the Muslims, who would only resort to violence if Jews were to ascend. Such routinized violence cannot be rewarded with sole access to the Mount. If that’s all they know then they shouldn’t be allowed there to begin with. Jews who wish to pray or march – in peace – on their rightfully owned land are being denied their legal rights.

It certainly sounds like Bennett is enforcing a zero tolerance policy against the Jews and maintaining the division of Jerusalem. His continued appeasement of Arab Islamists is damaging the very heart of Israel. What more will he sacrifice to stay in power?